WELCOME to the SOCIETY FOR THEATRE RESEARCH

Since 1948, the Society has advanced research into British-related theatre. We run lectures and conferences, publish books and journals, offer funding and prizes, promote excellent scholarship and support the continuing development of practice.

Next edition is due early next year

Are you eligible for one of our Research Grants?

London’s Burning: Social housing, performance, and politics of fire in an overheated market

Edward Stirling: Victorian actor, adapter and bigamist – with readings from his plays, including The Cabin Boy 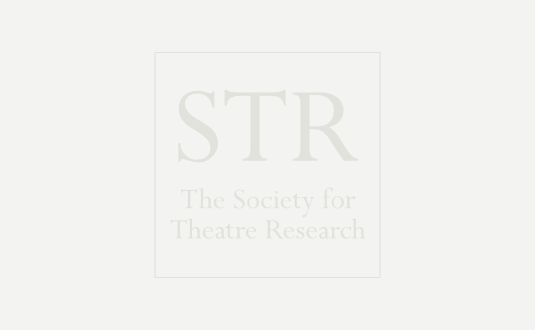 The STR and the restructuring of the V&A: statement and response and result

In March 2021, the V&A announced a fundamental restructuring of its entire collections, together with radical pruning of its personnel. One of the major casualties threatened was the Theatre and Performance Collections, formerly the Theatre Museum, the founding of which was one of the Society’s first and most important contributions to theatre research.  The whole theatre world responded vigorously to the threat with submissions to the consultation process and a huge petition in support of the Theatre and Performance Department  and its research facilities.  The STR’s submission follows here together with the reply from the Director of the V&A.  The result of the restructuring was officially announced in May 2021 in a press release which is reproduced below.  While the Theatre and Performance Collections remain as an entity, they have been subsumed into a new department called ‘Furniture, Fashion and Textiles, Theatre and Performance’ (we believe that T&P has subsequently been promoted to the front of this list).  There has been no detailed information released, as far as we are aware, regarding remaining staffing numbers in T&P and the redundancies, voluntary retirements etc necessitated by this restructuring, beyond the museum-wide 15% mentioned in the press release.

Timothy West, CBE, President of the Society for Theatre Research, and Professor Trevor R Griffiths, Acting Chair of the STR, on behalf of the Committee and Trustees of the STR Research, issued the following statement which was sent to the Director of the V&A, Tristram Hunt:

The Society for Theatre Research views the proposed restructuring of the Victoria and Albert Museum with great alarm as a major threat to the UK’s standing as a centre for research into and dissemination of knowledge about the performing arts. The Theatre and Performance collections are a major international and community resource that currently operate very effectively to the benefit of both scholars and the general public.

The STR, a driving force in the establishment of the collections through the dedicated work of Gabrielle Enthoven, has not been consulted and we believe that to lose any of the collective expertise and experience of the specialised staff runs the risk of setting back the study and appreciation of the extraordinarily rich performing arts heritage of this country. It will also have a very significant negative effect on recording contemporary theatre for the benefit of the future and will deter potential donors from enhancing the collection through their gifts.

This collection requires not only dedicated curators with aesthetic and historical knowledge of art and design and technical skill in the conservation of its contents but also archivists, librarians, and collections specialists with an understanding of the business and practice of theatre and contact and involvement with its practitioners.

Thank you for emailing me the statement issued by the President and yourself, as Acting Chair, of the Society for Theatre Research in connection with the proposed restructure of curatorial responsibilities at the V&A and the future of the Theatre and Performance Department.

Due to the impact of COVID-19, the V&A’s income has endured a catastrophic collapse. In the financial year 2020-21, we received less than 10% of our projected visitors; in the coming year we project barely 25% of our pre-pandemic numbers. For a museum which relies heavily upon self-generated income for such a substantial part of its funding, this has resulted in a £10 million p.a. structural deficit and has inevitably led to major savings needing to be implemented across the organisation, at every level.

Despite support from Government, we have had to make a wide number of changes, including reducing the V&A’s opening hours to five days a week; reducing our teams of gallery assistants and retail staff by 40%; radically reducing our acquisitions budget; postponing major redevelopments and exhibitions; cutting the size of the Executive Board; and, sadly, looking to reduce headcount in our Collections Division.

The proposals we initially developed were put together with a great deal of thought and aimed to retain all the material specialisms of the V&A whilst delivering the necessary 20% saving to the Collections Division.  This involved the creation of three new chrono-thematic departments which sought to promote new forms of collaborative working, whilst underpinning object-based knowledge, and also creating three extra posts focused on growing Africa and Africa-diaspora collections.  We also wanted to ensure our curators were focused on the opportunities available as part of our multi-site future with museums in South Kensington, Bethnal Green, Stratford, Dundee, Stoke-on-Trent and elsewhere, and the different ways of working promised by the creation of a new Collection & Research Centre in east London, following the aftermath of our exit from our long-term storage facilities at Blythe House.

The staff consultation period allowed us to listen to the voices of colleagues within the museum, as well as other supporters and collaborators of the V&A. Having reflected upon that feedback, we have now returned with an updated proposal which consolidates the V&A’s unique material specialisms into three new departments alongside a department dedicated to Asia.  Regrettably, we will still have to make the same number of redundancies (with as many as possible achieved through voluntary options), but we hope that this new plan will deliver a curatorial structure and vision that maintains both the V&A’s material-based ethos and delivers on my ambition to connect more effectively with the audiences of tomorrow, with their expressed interest in the historical provenance and broader cultural context of collections.

Theatre & Performance remains one the V&A’s most important and much-loved collections. However, as a result of the changes and savings we need to make, Theatre & Performance can no longer function as a stand-alone department. To safeguard its unique place at the V&A, the updated plans propose that Theatre and Performance come together with Furniture and Fashion in a new department which draws on long-standing intersections between these areas, and will hopefully create some particularly interesting collaborations around, for example, stage and furniture, costume and fashion.

I also want to emphasise that the Theatre & Performance collection will always be one of the V&A’s key national collections. Our superb Theatre & Performance Galleries and display space in South Kensington remain very much open. We will continue to explore opportunities around music, theatre and performance programming and exhibitions for the future.

The Theatre & Performance Archives will form part of the move to the Collection & Research Centre at V&A East – with the huge benefit of being accessible by many more researchers, students, and interested members of the public, supported by dedicated staff, than is currently possible at Blythe House.  The role of Theatre & Performance and its peerless archival collection within the V&A is a source of enormous pride and curatorial excellence across the museum and I fully appreciate my duty in caring for this tangible and intangible heritage, which is such an important component of our nation’s creative patrimony.

As with previous proposals, the final structure will be confirmed once the consultation has completed and all feedback has been reviewed, but I do hope that this update addresses some of your questions and concerns.

We will now work with staff over the coming weeks to ensure that their suggestions and responses are heard in the next and final stage of this unfortunate but necessary programme of retrenchment and reform.

Following an extensive collective consultation process, final plans for the V&A’s curatorial teams
have been confirmed. The V&A’s long-standing department structure based on material
specialisms will be retained with the creation of four new departments: ‘Sculpture & Applied
Arts’; ‘Furniture, Fashion & Textiles, Theatre & Performance’; ‘Graphic Art & Design,
Photography and Architecture’ and ‘Asia’ (final names TBC). These will sit alongside a combined
research department comprised of the V&A Research Institute, the National Art Library and the
V&A Archives.
These plans incorporate a range of feedback from staff and retain expertise across every area of
V&A collections while helping to meet the challenges of our £10 million annual savings target,
necessary to safeguard the museum’s future. We have consulted openly and meaningfully
throughout the process and would like to thank all our staff and external parties who shared
thoughtful and constructive points of feedback during consultation. Sadly, this means a
reduction of around 15% headcount – the expertise and institutional knowledge of those staff
leaving the V&A will be hugely missed.

The London Stage and the Nineteenth-Century World III: 15 – 17 April

NETWORKING at ONLINE CONFERENCES: Top Tips to get the most out of virtual events

Join the Society and become part of our next seventy years celebrating British theatre in all its aspects.