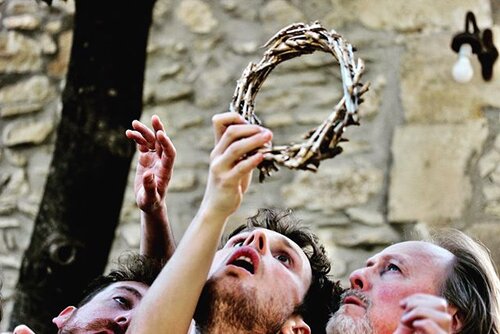 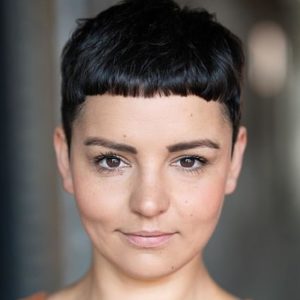 ANNIE McKENZIE, actor, writer, director and MasterChef semi-finalist, can be heard on Season 14 of BBC Radio 4’s ‘Home Front’ as Nurse Betty Newcombe.  She founded immersive dining company Scripts for Supper in 2017, and is co-founder of Quandary Collective, a new female led theatre company making bold adaptations of well-known stories and “striving to find ways to connect with one another, human to human, with honesty and clarity because the whole world is in a bit of a quandary at the moment, but perhaps together we can claw our way out”.  Annie was an applicant for Poel Workshop 2020.

What do you do when two years’ worth of work meant to culminate in a Central London industry showing of your brand new adaptation of William Shakespeare’s Richard II gets cancelled 48 hours before the event because of a global pandemic? Why, you make a short film, of course!

That is what we say to ourselves, early in the morning on Tuesday 17th March 2020 after a brilliant, exhausting, liberating two week R&D with the cast and creative team behind Quandary Collective. Our new version of Richard II is set in a post-pandemic, post-Civil War England, where a global ecological collapse has meant a return to caveman violence and feudal law. There is a war brewing, and the politics of old and young grapple with each other to maintain a fragile peace. So… a bit like living in Britain today, then?

The Company – and the idea – came into being over pizza one night several years ago, as I asked my co-founder Coco Maertens which character she would most like to play in all the world. She said Richard II, and the rest is history.

So when we realise this Covid-19 thing is here to stay, and the future of the whole world rather than just the future of our play looks uncertain, we get savvy.

We get all of the actors who are available and willing to travel to meet for one final day of filming at Cuckoo Bang Studios in Bermondsey, and we get to work. We film everything from Bushey’s violent death to “This royal throne of Kings” and all the parts in between.   I remember that day being frightening, overwhelming and anxiety provoking.

None of us knew what was going on. We had never lived through such uncertain times – and that’s saying a lot when most of us have spent our lives working as freelance creatives!  But we did it. We left that room on a cold, wet March evening with two SD cards full of footage. Exactly 4 months later, after Coco’s countless edits, our going a little bit crazy a few too many times, barrels of laughter, buckets of tears, and a world that looks mighty different now to how it did when we started this thing, and we had made the short film. We had made a show pack. We found a way to sell our show.

If you fancy taking a sneak peek at what it is we do, visit our website or follow us on Instagram@Quandarycollective – we’d love to hear from you.

Stay strong. We are not alone. Together, we will save the arts.