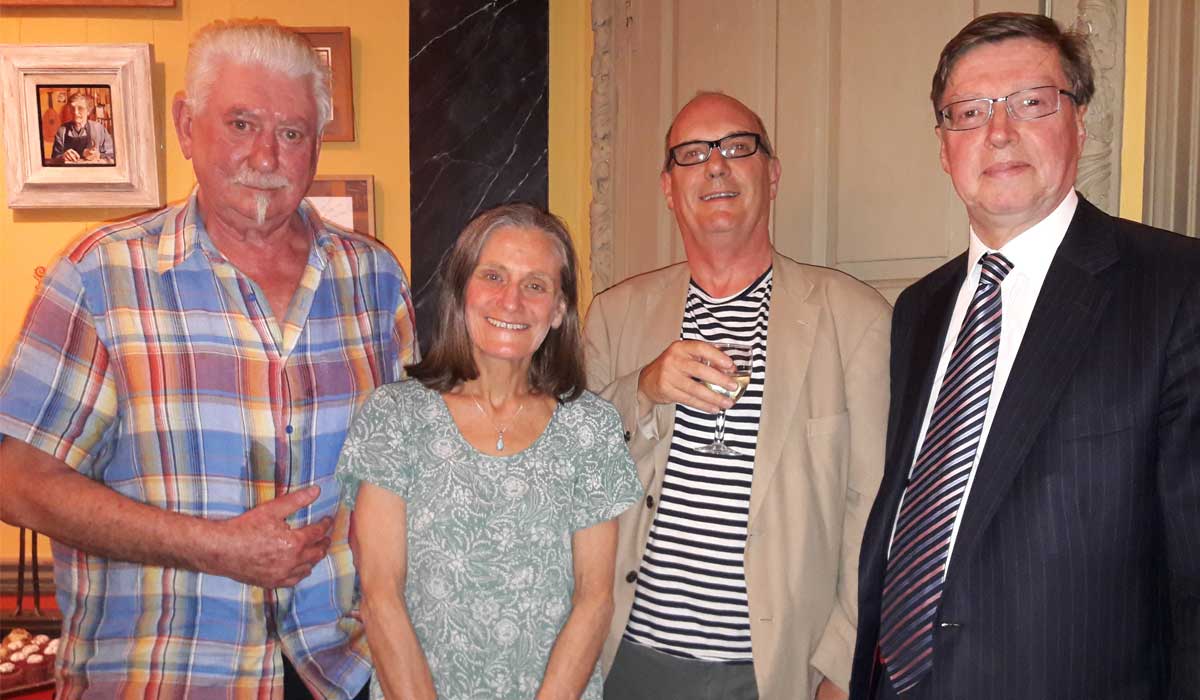 At our AGM in May the Research Awards for 2018 were distributed, and although applicants and recipients come from all over the world, we were lucky to be able to meet some of this year’s winners in person. The photo shows (from left to right) Robert Kenny, Laura Higgins, Anthony Binns and Robert Whelan – the full list of recipients from this and previous years can be found here

One aspect of our awards is that in certain circumstances we are able to fund a project over three years – each year’s application has to deal with a different or further element of a large project, and the applicant has to show that the previous year’s element has been satisfactorily completed. You can see the results of one such large project in Susan Croft’s Oral History Survey (for details email membersinterests@str.org.uk)

Robert Whelan won an award this year for a further tranche of his catalogue of performances at Drury Lane. He writes:

In May 2017 I was fortunate enough to receive the Anthony Denning Award. This took the form of a grant of £250 towards my project to put up on my website a complete table of all performances at the Theatre Royal, Drury Lane, during the period when Frederick Balsir Chatterton was first manager and then lessee: 1862 to 1879.

Chatterton’s management saw the transition at Drury Lane from the old-style repertory system which still prevailed under E. T. Smith’s management (1852 to 1862) to long, continuous runs. Repertory became uneconomic and impractical, as the scenic element in productions became more important and shows involved, in some cases, hundreds of dancers and supernumeraries.

I am exploring these issues in my biography of Chatterton, Shakespeare Spelt Ruin: The Life of Frederick Balsir Chatterton, Drury Lane’s Last Bankrupt. This will be published towards the end of 2018. To include the entire Drury Lane repertory for a period of seventeen years in the book would be impractical. However, it will assist readers of the book to be able to see on a website, at a glance, the relative length of the runs of the productions they are reading about.

The website is open-access, so this information will be freely available to scholars and researchers, and the table is to be incorporated in the London Stage Project (1800 – 1900). Click here to see the website in progress.

In 2018 I was fortunate enough to receive a further grant towards this project of which the ultimate aim is to work backwards in order to create a calendar of performances at Drury Lane going back to 1800, when the magnificent work of The London Stage, 1660-1800 comes to an end.

The second grant is to cover the period of E. T. Smith’s lesseeship: 1852 – 1862. This was a critical period in the history of Drury Lane as Smith could be said to have saved the theatre from demolition. In 1852 the Duke of Bedford’s London agent was advising him to foreclose on the lease, demolish Drury Lane and replace it with some buildings on which it might be possible to collect rent. The managers of Drury Lane had collapsed in bankruptcy, one after another, and it was a long time since the rent had been paid. However, when E. T. Smith took over with a flourish at the end of 1862, the agent changed his mind and thought it was worth giving Smith a chance.

Smith survived for ten years, which was longer than any of his predecessor lessees. He paid his rent to the committee of proprietors, who in turn were able to pay the rent to the Duke of Bedford and to pay dividends to shareholders. Smith did this by pursuing an unashamedly populist policy, putting on anything the public would pay to see, whether it be Shakespeare or a man who could walk on the ceiling.

A complete calendar of Smith’s lesseeship will show the almost frantic way in which he switched from Shakespeare to circus to opera to vaudeville in the fight for survival. It will also show how Smith experimented with different price structures to test the market and discover what made Drury Lane viable. He changed seat prices frequently, often more than once a year.

Smith was very much criticised by his contemporaries for taking Drury Lane to its lowest level of crow-pleasing populism, and his treatment by theatre historians since has not been much more favourable. However, he kept the doors open and Drury Lane survives today because of him. He is one of what W. Macqueen Pope called ‘The Pillars of Drury Lane’, albeit an unacknowledged one.