When West End star William Terriss was murdered outside the stage door of the Adelphi Theatre in December 1897 it was part of a melodrama as sensational as any of those in which he had had such great success. The villain, Richard Prince, was a much less successful actor; the heroine was Jessie Millward, Terriss’s leading lady.

A real-life melodrama, the murder of William Terriss by fellow-actor Richard Prince in 1897 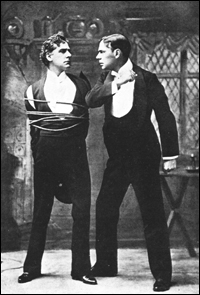