In 1771 a new concert hall was built on a plot of land just off London’s Tottenham Court Road. Amateur theatricals staged there by the aristocratic Pic-Nic Society soon aroused the hostility of the Patent Theatre managers, keen to protect their monopoly. The hall was refitted as a theatre in 1810 and for more than seventy years the little theatre in Tottenham Street was a busy place of entertainment for the neighbourhood and beyond. It underwent several name changes but is best known today as the Prince of Wales’s.

The size of the playhouse, seating around 560 people, limited the scope of productions as well as potential revenues.  In the early decades audiences’ insatiable appetite for variety meant bills dominated by lurid melodrama, pantomime, nautical drama and farce.  Success was often elusive and changes in management frequent. In the 1860s, however, the intimate theatre proved the perfect space for the development of realistic drama and the theatre became a fashionable destination for London theatregoers.

Many stars of the London stage appeared at the theatre in Tottenham Street in the course of the nineteenth century, including Madames Vestris and Céleste, Louisa Nisbett,  John Hare, Marie Wilton, Squire Bancroft, Ellen Terry,  Madge and William Kendal, Johnston Forbes-Robertson and Genevieve Ward.

The longevity of the physical building was remarkable. The playhouse remained open for nearly a century. While it was renovated periodically, the building underwent no large-scale improvements and miraculously escaped fire. Finally, in 1882, it was judged to be unsafe and closed. The building was razed in 1903.

This book gives a detailed account of the hundreds of artists who appeared at the playhouse as well as recording the notable variety of productions on the playbills. As a closely focused history of a single venue over more than a century, it adds invaluably to our knowledge of London theatre history.

A closely focused history of a single venue in London over more than a century, it adds invaluably to our knowledge of London theatre history 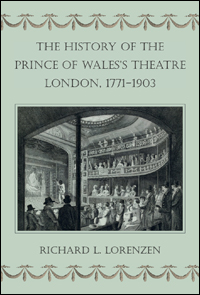