Tavern Singing in Early Victorian London: The Diaries of Charles Rice for 1840 & 1850

Edited with an introduction and notes by Laurence Senelick

Charles Rice was a messenger and attendant employed by the British Museum who spent his evenings singing in London tavern concert rooms. His diaries record his repertoire, his playgoing and a lively Dickensian scene as he tries to make a name for himself as a comic singer. The editor’s introduction tells us more about Rice and the development of these precursors of the music hall.

Two years of the diaries of Charles Rice, a messenger and attendant at the British Museum who spent his evenings singing in London tavern concert rooms 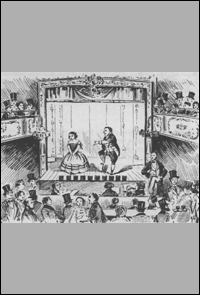