by Various Contributors, including a Preface by George Speaight

An Extract from George Speaight’s Preface: It was through the initiative of Ifan Kyrle Fletcher that the Society for Theatre Research was brought into existence, and his death on January 1st 1969, at the age of 63, deprived the Society of one of its most valued members. Shortly after his death the Committee of the Society expressed the wish to honour Ifan’s memory, and to record his services to theatrical scholarship, by the publication of a Memorial Tribute. Published in 1970, and previously thought to be out of stock, some further copies of this tribute have recently been found in our stores, and are now offered for sale.

Contributions:
Family Antecedents, by David Kyrle Fletcher
The Young Man, by Arthur F. Dolman
The Bookseller, by George Speaight
The Theatrical Scholar, by Norman Philbrick
Theatre Notebook, the STR, and the British Theatre Museum, by Sybil Rosenfeld
The International Federation for Theatre Research, by A. M. Nagler and Frithjof van Thienen
A Personal Memoir, by Eric W. White
Select Bibliography 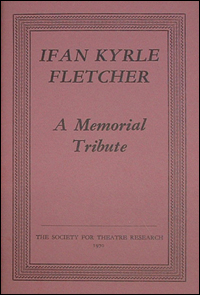