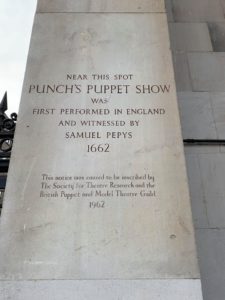 The Society for Theatre Research gets a mention in the ‘Country Life’ magazine of 8 July. In an article about Punch and Judy the following paragraph appears:

‘Signor Bologna’s performance for the Court of Charles II closely resembled the out-door show witnessed by Samuel Pepys that May in the vicinity of Covent Garden, as the commemorative stone tablet erected there in 1962 by the Society for Theatre Research and Model Theatre Guild attest’.

One of the founder members of the Society in 1948, George Speaight, masterminded of the 1962 festival in Covent Garden to mark the tercentenary of the first sighting on English soil of Punch the puppet. The stone tablet referred to in ‘Country Life’ was unveiled during the festival, in which there appeared of as many Punch and Judy as could be brought together. The plaque is located in the spot where Samuel Pepys saw Punch’s performance.

George was a member of the Committee of the Society from the beginning, its Chairman from 1959 to 1963 and subsequently Chairman of the Publication sub-committee for some years, remaining a Vice-president until his death in 2005. His life and  work as showman and historian of a miniature world is remembered in volume 60 No.1 of Theatre Notebook, to which he often contributed, and was both an editor and later its editorial manager.