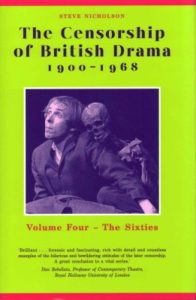 Last year’s best book about British theatre, according to the judges of the 2015 STR Theatre Book Prize, was a fascinating study based on the files from the Lord Chamberlain’s Office now held in the British Library. At a gathering of people from the theatre and the book world held in the historic rooms of the Theatre Royal Drury Lane, distinguished actress Dame Siân Phillips presented the prize to Steve Nicholson for The Censorship of British Drama 1900-1968 (University of Exeter Press), the fourth and last volume in the series.

The title may sound portentous but the book certainly isn’t. It is a fascinating story of conflict and connivance involving Royal officialdom, theatre managers and some of the key dramatists of the twentieth century. Critics have described it as ‘forensic and fascinating’ and called Nicholson ‘a scholar who writes with lucidity, wit, humane intelligence and grace of mind. There is no jargon in his pages, but much glorious hilarity.’

In remarks by the judges leading up to the presentation Colin Chambers called it ‘The final volume of a terrific and important series in which Nicholson delivers his original research into the practice of theatre with characteristic enthusiasm. His detailed account of how theatre and the society it reflects interact is seen through the prism of censorship. I hope the whole series will at some point be made available to a wider audience in paperback.’

Author Nicholson, who is Professor in Twentieth Century and Contemporary Theatre at the University of Sheffield, wins after being short-listed for this prize in previous years. Formerly a founder member of White Horse Travelling Theatre he claims his performance as the donkey in Ali Baba and the Four Tea Thieves is still remembered fondly by many who attended primary schools in Somerset in the late 1970s. 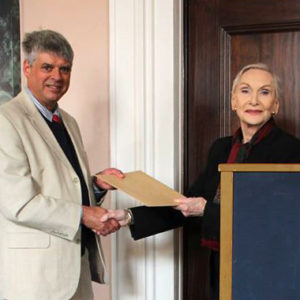 Colin Chambers, Professor Emeritus Kingston University, formerly Literary Manager at the Royal Shakespeare Company and author among many books of the winner of the first Theatre Book Prize, awarded in 1997 for his The Life of Margaret Ramsay, Play Agent.

The competing short-listed titles were:

1606 William Shakespeare and the Year of Lear by James Shapiro (Faber & Faber) Described by Chambers as ‘a fascinating follow-up to his 1599 [which won this prize in 2005] that offers informative insight into the context behind some of Shakespeare’s most significant plays.’

Howard Barker’s Theatre: Wrestling with Catastrophe edited by James Reynolds and Andy W. Smith (Bloomsbury) ‘Sticks,’ as judge Sarah Hemming remarked, ‘to just one writer, offering a rich and engaging reassessment of this original and influential dramatist. It draws on experience and opinion from practitioners, academics and critics to explore and evaluate Barker’s methods, aesthetic concerns and significance.

Orson Welles: One Man Band by Simon Callow (Jonathan Cape)
Judge Sam Walters said this was ‘a fine practitioner writing not about himself and his work, but about one of the most extraordinary men to have been involved in our profession [who] often declared that the theatre was where he wanted to be. Those who witnessed Moby Dick will surely never have forgotten it. Callow brings vividly to life his Falstaff, on both stage and screen, his Lear, his directing and indeed the whole of this monstrous and contradictory man.’

John Osborne – ‘anger is not about…’ by Peter Whitebrook (Oberon Books)
‘An excellent biography,’ said Walters, ‘of the endlessly compelling practitioner and angry young man …. who lost more friends than he made. Osborne will always hold a special place in the world of theatre.’