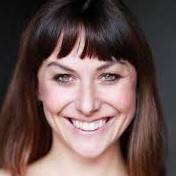 SARITA PLOWMAN is an actress of some 20 years experience.  She has worked in film, television and radio, but mainly in theatre in roles as diverse as Hermia in A Midsummer Night’s Dream to Dormouse in Mad Hatter’s Tea Party.  She participated in the Poel Festival of 2004 at Shakespeare’s Globe.

I had the pleasure of stepping into a theatre in July and performing a show I had written and devised with the rest of the cast and performing to nearly 6000(!) school children to celebrate the end of a difficult term.  How was that possible?

The Flying Seagull Project works with varying groups across the world to help bring smiles and happiness to people, whether as Clown Doctors for children undergoing difficult medical treatments or through games, arts, music and crafts workshops and circus shows.  The ‘Spectacular’, the story of a redundant lighthouse keeper who embarks on a highly interactive adventure involving pirates, magic, clowning and music played to sold out audiences in Streatham in 2019.  This time we performed at Applecart Arts Theatre, who have invested in three broadcast quality cameras and microphones to enable theatre to be live streamed in high quality. As soon as we heard about Applecart Arts live streaming service, we jumped on board and began rehearsing a physically distanced version of the show on a rooftop in Soho, determined for as many children as possible to see and experience our magical show! 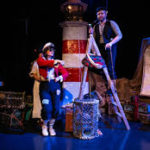 On the day, we had three camera operators, a sound technician and vision mixer who helped us create an amazing theatrical experience and I would go so far as to say, it felt like we were creating a new genre altogether (a hybrid of theatre and television).        We kept the show interactive by addressing children down the camera and we even included some pre-recorded footage within the live stream as part of the story.  We managed to get a great number of schools on board and played to children in Germany, Argentina and Australia as well as thousands of UK school children who were left without their usual end of term treats.

I am now about to start an open air tour of The Importance of Being Earnest with DOT Productions – this will be physically distanced and the audience is limited capacity and in ‘bubbles’.

Theatre is definitely NOT dead. Most of us storytellers have been beavering away in the background. Stories will always be needed!