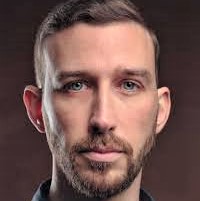 ROBERT MYLES describes himself as an actor-director-writer of working-class origins.  He has been performing for over a decade, mainly in Shakespeare, and is the author of The Shakespeare Deck, a text-work exploration tool for actors.  He was an applicant for the 2020 Poel Workshop.

I like so many others lost work as the pandemic hit, and it hasn’t recovered since.  I chose to take solace in Shakespeare. I sent a tweet of my intention to start a Shakespeare reading group, streamed live. It went viral, and friends rallied around to turn an idea into an inclusive, joyful, global project.

Since the first show on March 16th, I have endeavoured to direct the complete works of Shakespeare, broadcast live via YouTube to a global audience, every week. The Show Must Go Online has now reached the half-way point in the canon: I have read, edited, researched and directed 18 Shakespeare plays in 18 weeks, winning two OnComm Awards so far in the process.    The project has created a global movement, working with over 300 actors, attracting over 150,000 views, and live audiences of 150-250 every week. The shows have been featured on BBC Newsnight twice, in The Guardian, Playbill and other global media, and has attracted multiple 5- and 4-star reviews.

I have worked harder than ever in lockdown, with actors of all levels of experience, from veterans of The National, The RSC, Shakespeare’s Globe and Shakespeare In The Park NY, to those who have never read Shakespeare aloud before, from 6 of the 7 continents.. The project has established a Patron opt-in hardship fund for all those who take part.

This is not sustainable economically: I make no money from this and we don’t receive funding due to the model not matching the criteria of funding bodies.  But I see what I’m doing as investing in my future by undertaking a marathon of professional development, accruing years of experience in months.  The project has stretched me as a director and I have grown so much every single week. Similarly, I’ve learned from every actor that has come through the door how to be a better performer myself. 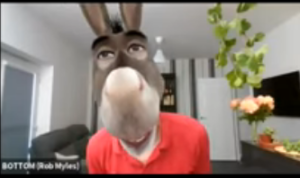 I even participated in A Midsummer Night’s Dream, as Bottom.