Robert Owen and The History of Purgatory 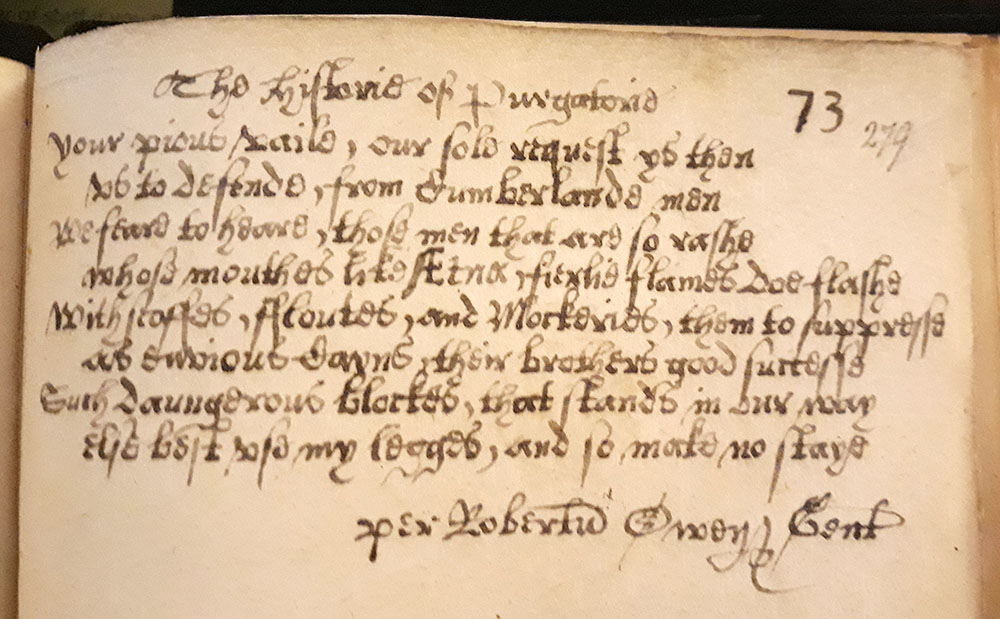 Image: ‘per Robertum Owen, Gent’ (by Robert Owen, gentleman). Robert Owen’s signature following the epilogue of The History of Purgatory.

Dr Gašper Jakovac is a Max Weber Fellow at the European University Institute, Florence. He is a cultural historian, specializing in early modern theatre, popular culture, and post-Reformation Catholicism in England.  He was awarded a grant in 2019 for research into the background and performance history of this play, and he writes for us here:

The Society for Theatre Research award was essential to the progress of my current research project: a scholarly edition of an early-seventeenth century play The History of Purgatory (to be published by the Pontifical Institute of Mediaeval Studies, University of Toronto).

Surviving in a sole manuscript, now held by the British Library (Add. MS 11427), The History of Purgatory is a unique example of Catholic vernacular drama from post-Reformation England, offering an unparalleled window into the underground culture of a persecuted community. The play, a dramatization of Guillaume de Deguileville’s mid-fourteenth-century allegorical poem about the soul’s journey after death Le Pèlerinage de l’Âme (The Pilgrimage of the Soul), was most probably composed by Robert Owen, a Shrewsbury gentleman, and almost certainly performed in a private house during the Christmas holidays in or around Shrewsbury.

Through generous support of the Society for Theatre Research, I was able to travel to Shrewsbury to learn more about the author and the play itself. Trawling through the collections at Shropshire Archives and Staffordshire Record Office, I gathered new facts, tied loose ends, and opened new avenues for future inquiries. I have, for example, uncovered a number of important details about Robert Owen’s life, his family, and social connections.

Relying on palaeographical and contextual evidence, I have confirmed Professor Alison Shell’s earlier suspicions that the scribe and the owner of the BL volume of pamphlets was indeed Robert Owen, gentlemen of Shrewsbury and a deputy herald of arms, who was buried at St. Chad’s parish (Shrewsbury) on 8 November 1632. He was the eldest son of Richard Owen of Shrewsbury, mercer and draper, and Alice Ireland. He married Margaret Harris of Presteigne, Wales, with whom he had five daughters: Alice, Katherine, Margaret, Christian, and Sarah.

The very same Owen was also a Catholic and a staunch recusant. In the available ecclesiastical visitation book of the Diocese of Lichfield and Coventry, he repeatedly appears presented for recusancy (for being regularly absent from his parish church). Sometime before June 1614, Shrewsbury bailiffs imprisoned Owen for being a recusant and for refusing to take the oath of allegiance. However, his sojourn in town gaol seems to have been rather short. On the 28 June 1614, he was released on the authority of Richard Maddock, the Crown’s collector of recusant debts. Rather than keeping Owen in prison, the Crown was probably more interested in receiving his money.

It seems that Owen’s debts were finally settled four years later, in 1618. Although more research is needed to determine the exact nature and amount of this debt, it seems likely that it was accumulated through Owen’s recusancy. In order to settle the liability, protect his property from State sequestration, and provide for the future of his five daughters, Owen conveyed all of his substantial estate into the hands of Humphrey Sandford and Edward Mitton, who acted as trustees.

These newly discovered details of Robert Owen’s life strengthen our understanding of The History of Purgatory as uncompromisingly recusant literature. Owen’s determination to profess his Catholic faith by subscribing overtly Catholic texts in the surviving volume of pamphlets, including the play itself, was matched by his everyday opposition to the established religion. Although the archives keep silent about the context and the exact date of the performance, the connections of Robert Owen with members of important local Catholic families, such as the Sandfords of the Isle of Up Rossall and the Giffards of White Ladies and Boscobel, can inform our future speculations about who might have seen or even participated in the staging of The History of Purgatory.

Could your research be eligible for an award from the STR? This year’s round of awards is closed, but bookmark the Awards page here and check back later in the year.