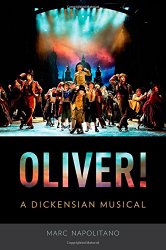 The presentation of the STR Theatre Book Prize for books published in 2014 took place on Friday 22nd May 2015 in the Val Parnell Suite of the London Palladium, kindly made available by Really Useful Theatres.

A gathering of theatre and publishing people, media folk and academics heard the judges speak about the year’s books which were all on display and the Society’s President, actor Timothy West CBE, announced the winner and made the presentations to short listed authors and editors.

Unusually the five titles on the short list came from just two academic publishers but the subject of the winner could not be more populist for it went to Oliver! A Dickensian Musical by Marc Napolitano (published by Oxford University Press).

Professor Napolitano could not personally be present to receive the award. He is on the staff at West Point, the famous US Military Academy – it is surprising in what varied places you can find theatre buffs.

In the judging panel’s introductory comments critic Matt Wolf described the winner as:

one of the most enlightening books on musical theatre process – or, for that matter, theatrical process of any kind – that I have yet come across. Illuminating about both the art and the commerce of that endeavour that we call show business, the book combines context, analysis, and theatrical smarts into an immensely readable whole. Academicians will appreciate its investigation into the art of adaptation while musical devotees will be delighted to find in one volume more than they could ever have hoped to learn about the making of arguably the first show to put Britain on the global musical map – not to mention the lasting legacy of Oliver! ever since.

The Judging Panel
The judges for books published in 2014 were:
Christopher Morahan CBE, a theatre, film and television director with an impressive record of work at the National Theatre, Chichester Festival Theatre and in the West End and director of iconic television drama such as The Jewel in the Crown and A Dance to the Music of Time.
Matt Wolf, the London theatre critic of The International New York Times (formerly The International Herald Tribune), theatre editor at the artsdesk.com and London correspondent of broadway.com. And
Vivien Gardner, Emerita Professor of Theatre Studies at the University of Manchester.
It was chaired by Howard Loxton representing the Society for Theatre Research

Books entered for the 2014 Prize
A list of eligible entries received can be found here, from which links will take you to each book’s try in its publisher’s catalogue.