Written in 1948 for the governors of York Citizens’ Theatre, this early text by a distinguished theatre historian had long been a valuable source for scholars but not previously published. After outlining earlier theatrical activity in York it outlines the development of the first Theatre Royal under manager Tate Wilkinson, and follows his successors through the decline of the stock company to the late 19th and early 20th century touring house, and its threatened closure or conversion into a cinema, to its rescue by local people in 1934. 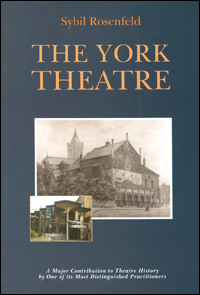