The name of Harley Granville Barker is well known both in the theatre industry, where his plays continue to be performed, and in academic study of drama and theatre, especially Shakespeare studies.   However, because almost no attention has been paid to an archive which the British Library purchased in the late 1990s,  work  published on him has been inaccurate about both his beliefs and the major career change in his life.

This British Library archive is the richest source of material on Granville Barker:   its contents show his beliefs and his most personal feelings    It  consists mainly of correspondence between Barker and  Helen Huntington, whom he met in 1914 and who became his second wife in 1918.  These letters tell us the truth about the early years of their relationship as well as what they read, discussed and planned. This book presents extended extracts from the Barker-Huntington correspondence together with unfamiliar short essays by Barker and some interviews which were published  in American newspapers.   These cover topics such as the future of American theatre, uses of drama with children with learning difficulties, eurhythmics, and the origins of theatre.

Impeccably edited and abundantly annotated by Simon Shepherd, the primary texts are accompanied by contextualising essays about Helen Huntington.  The first looks at the personal lives and crises of those involved in the break-up of Granville Barker’s marriage to his first wife, Lillah McCarthy.   Reconsidering McCarthy’s  actions, this essay also suggests that Huntington was abused by the husband from whom Barker rescued her.  A second essay addresses the portrayal of Helen Huntington as a theatre-hating woman who ruined Barker’s career.    In fact she was a regular theatre-goer, a writer, and  Barker’s eventual collaborator. Little-known portrait photographs of her are reproduced as  two of the book’s three illustrations.

The book presents extended extracts from the Barker-Huntington correspondence, together with unfamiliar short essays, taken from an extensive Granville Barker archive at the British Library. 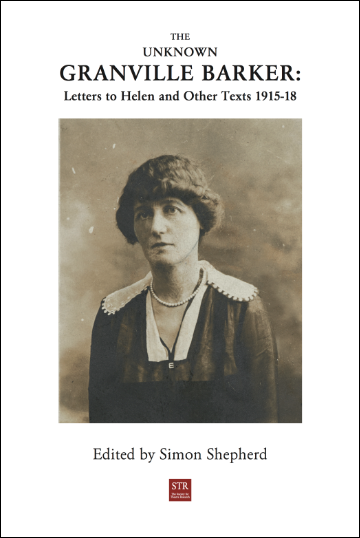