The Juvenile Drama: A Union Catalogue

Some 324 plays were adapted for the Juvenile Drama — toy theatre — and the ‘penny plain tuppence coloured’ sheets produced preserve a record of the scenery, costumes and even gestures of the actors of the first half of the 19th century. This catalogue, based on the holdings of 5 libraries or museums in England and 3 in America gives publisher, theatre where known, type of sheets printed and collections where held for each surviving play.

This catalogue is based on the holdings of collections in the UK and America, and lists details of the printed ephemera surviving for the Juvenile drama of the 19th century 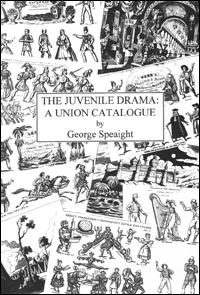