Off-Centre Stages. Fringe Theatre at the Open Space and the Round House 1968-1983

Before 1960 the notion that theatre might happen in any space where people could gather had hardly been explored. Charles Marowitz and Thelma Holt founded the Open Space in a basement in London’s Tottenham Court Road; Arnold Wesker (and later Thelma Holt again) developed a disused Victorian engine shed in Camden into the Round House theatre and arts centre. These were exciting times, and the productions they spawned were often challenging, and occasionally offensive. This is an important history of a key period in British theatre, made possible by the author’s discovery of the archives of both venues. Placed in the care of the Theatre Museum they are now in the V & A Theatre Collections.

Co-published with University of Hertfordshire Press.

This is an important history of a key period in British theatre, chronicling the development of theatre in non-traditional venues 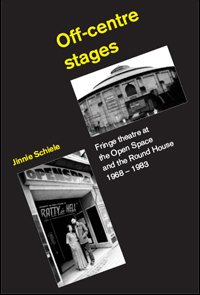