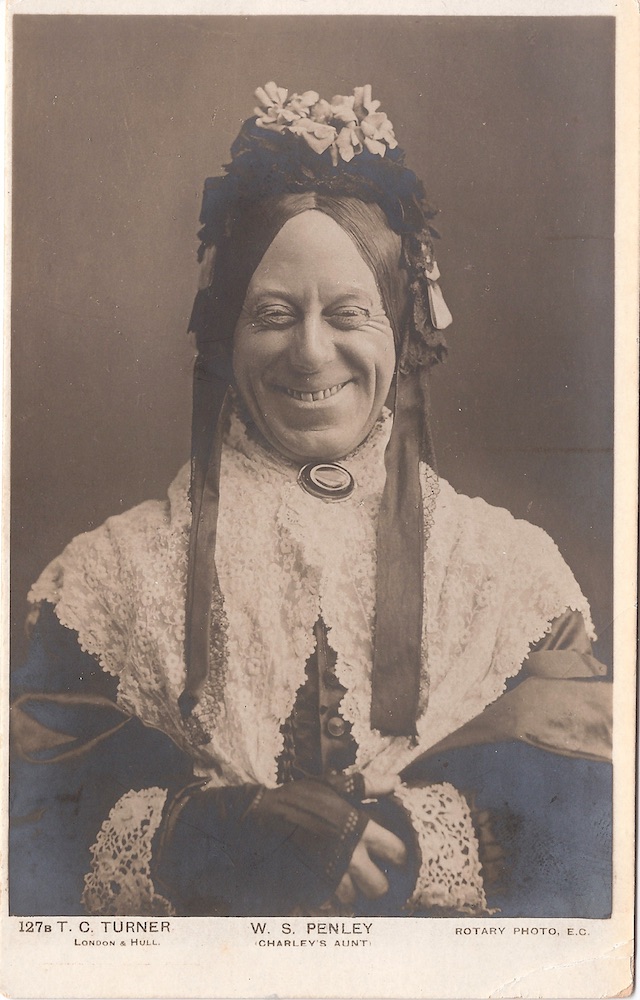 Chris O’Rourke (University of Lincoln) won an Award in 2017 for his researches into male cross-dressing on stage and screen: gender, sexuality and performance in Britain, 1896-1939.
He writes:

This project set out to explore male cross-dressing performances in British films made between the 1890s and the 1930s, and to situate these films in relation to both theatrical performance traditions and changing ideas of acceptable masculine behaviour. I was interested in capturing the variety of situations and stories involving men’s cross dressing that were shown on screen, and I also wanted to see how investigating these films and their reception could add to existing histories of gender and sexuality in modern Britain.

So far, I have identified nearly one hundred British films featuring male cross-dressing performances made between 1898 and 1940. Most of these are sadly lost, but – with the help of my STR research award – I have been able to watch surviving examples held by the BFI Archives, and to reconstruct others by consulting descriptions in early filmmakers’ catalogues, trade magazines and script material in the BFI library. About 60 of these titles were shorter films made before 1918. The majority were comedies, and these are the subject of the first article to come out of this research, which I am currently in the process of writing up. There were also a smaller number of crime films, in which women’s clothes are adopted for purposes of disguise, either by criminals on the run from the law, as in The ‘Lady’ Thief and the Baffled Bobbies (1903), or by detectives going undercover. This is a trope that was still popular in later British feature films, such as Alfred Hitchcock’s Murder! (1930) and Michael Powell’s Hotel Splendide (1932), and I hope to come back to these films at a later date.

Among the early film comedies, I found a number of interesting links with popular stage practice. Some of the earliest films I looked at featured music hall comedians and ‘quick-change’ artists showing off their skills of female impersonation. These included short ‘facial’ films by G.A. Smith, such as Grandma Threading Her Needle (1900), with the jobbing local comedian Tom Green. There was also a 1913 British film featuring the well-known music hall comedian and pantomime dame Malcolm Scott as a housekeeper, although this doesn’t seem to have come down to us.

Many of the longer cross-dressing comedies derived their plots from the hit play Charley’s Aunt, as you can tell from the titles of Aunt Tabitha’s Visit (1911), Oh! My Aunt (1913), Joey’s Aunt and Oh Auntie! (both 1916). Surviving examples of these films suggest that W.S. Penley’s performance in the original 1892 run of the play, and his subsequent imitators, made a strong impression on early filmmakers. Interestingly, performers of what Laurence Senelick calls ‘glamour drag’ do not tend to appear in early British films, although reviewers were full of praise for a string of American films featuring the female impersonator Julian Eltinge, which arrived in British cinemas in 1918. Also around this time, the music hall star George Robey made a patriotic film – Doing His Bit (1917) – which mobilised burlesque drag for the war effort.

One of the areas I am currently doing more research on is a series of anti-women’s suffrage comedies, which use cross-dressing to make fun of ‘mannish’ women’s rights campaigners or to imagine a world in which gender roles are reversed, usually with horrific consequences. These films suggest some of the social anxieties animating cross-dressing comedies at the turn of the twentieth century, and they are a particularly stark reminder of how conservative British popular culture of this period could be.

If you have access to online scholastic journals, you can read the whole excellent article here.

The award helped cover expenses involved in travelling to and working in the BFI archives, an intensive survey as you can gather from the amount of material cited. If there is an aspect of your own theatrical research which might be eligible for one of our awards, don’t miss the deadline for this year’s applications – March 27th.
Read more and download the application form here.