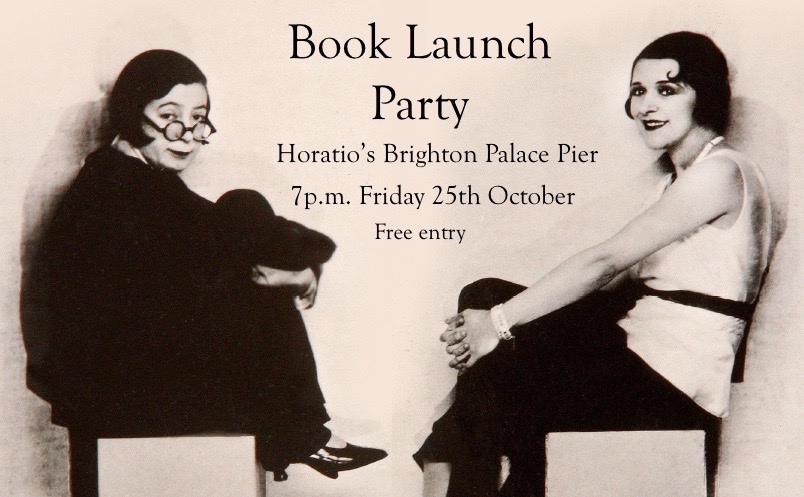 Alison Child won a Research Award earlier this year to secure image rights for her new book Tell Me I’m Forgiven about the music-hall stars Gwen Farrar and Norah Blaney. This is just about to be published and will be launched on October 25th in Brighton. Miriam Margolyes says, ‘I adored this lovely, moving, story, so well researched, such amazing photos. Lesbian passion – skilfully evoked in the 1920s showbiz milieu. Wish I’d been there!‘

In 2014 I discovered the revue stars Gwen Farrar and Norah Blaney on a grainy piece of silent movie footage someone had posted on Youtube. Clowning around on a golf course in 1924 were two young women demonstrably in love.  Their mutual attraction was on show for the camera, but there was no mistaking the authenticity of their bond. Here was a romantic friendship captured on film – funny, touching, playful, spontaneous.

I set out to discover everything I could about Gwen Farrar and Norah Blaney, and their remarkable career together in the 1920s. I found out that they had met in 1917 as members of Lena Ashwell’s pioneering WW1 concert parties for the troops. Norah played the piano and sang. Gwen was a cellist. When they got together Gwen was nineteen and Norah twenty-three. Within three years they had established themselves as England’s first great female comedy double act, appearing in the 1921 Royal Variety Performance at the London Hippodrome.

Singing the popular songs of the day to each other, to their own accompaniment and, crucially, not taking themselves too seriously, they became enormously successful with an act that had wide appeal across class boundaries and regional divides. They toured the UK extensively between 1919-1931. They starred in four of André Charlot’s famous revues and, notably, in  The Punch Bowl which ran for almost 2 years at the Duke of York’s Theatre. After this Florenz Ziegfeld took them to perform in New York and Palm Beach in an attempt to rival Charlot’s famous 1924 Revue in which  Bea Lillie and Gertrude Lawrence took Broadway by storm.

P.L. Travers (later of Mary Poppins fame) wrote rapturously about them in 1925. ‘Blaney and Farrar – once those two words would not have conveyed much to the public at large…but now they conjure up sounds of a ‘cello that sings divinely even when it’s playing ragtime and ridiculous mirth-catching topical songs that swing up to tumultuous applause. They have got their public these two – got it tightly in their hands’. (Pamela Travers, Dressing-Room Dialogues: Gwen Farrar in Grease Paint. Cape Town: South African Pictorial 21st February 1925)

After they broke up in 1926, Norah starred in the London premiere of The Vagabond King at the Winter Garden Theatre and Gwen went into partnership with the gifted pianist and composer Billy Mayerl. Gwen and Norah reunited in 1930 to perform with Jack Buchanan and Cicely Courtneidge in The House That Jack Built and in Wonder Bar, for producer André Charlot, at the Savoy. They gave their farewell performance  at the London Palladium in February 1932. Gwen went on to play a key role in the production of the 1932 revue After Dinner and to appear in three British films.

Norah left the profession for twenty-seven years, then re-emerged resplendent as a feisty Mistress Overdone in Measure for Measure for the Royal Shakespeare Company in 1961, alongside Ian Richardson and Judi Dench.

My 90,000 word biography of the pair (published by the Tollington Press) will be launched on October 25th, and I’m delighted to say that Blaney & Farrar will soon have their own entry in the Oxford Dictionary of National Biography.

Since Gwen and Norah first sprang to my attention through a visual medium, it feels right to tell their story through some astonishing pictures; photographs, caricatures, press clippings and production shots.  A generous award from  the Society for Theatre Research has allowed me to do that. Now STR members are warmly invited to a launch event on Brighton Palace Pier (where Blaney & Farrar performed together in 1931).  Refreshments will be served and there will be readings and performances.

Details will be posted shortly in the Events section of the website. Copies of the book will be available on the night, or can be pre-ordered here for only £10.99 (RRP £11.99).