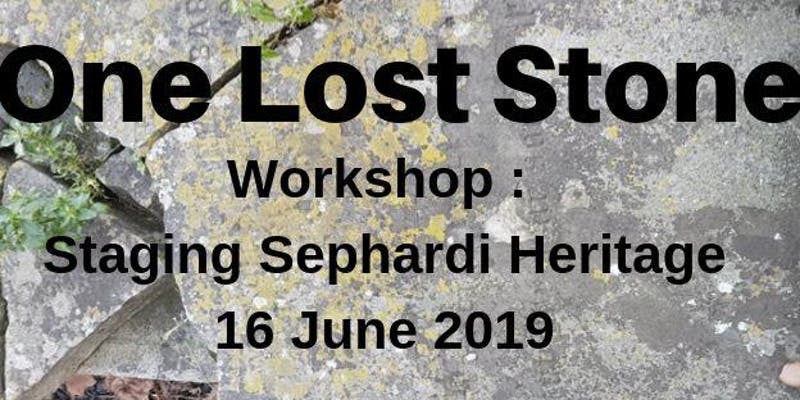 A chance to be part of a fascinating site-responsive performance by taking part in a workshop on June 16th.  Liza Frank writes:

Discovering & Documenting England’s Lost Jews is a huge adventure into mapping different histories and finding connections. Using these discoveries we are creating a site-responsive performance, One Lost Stone, that will premiere on 22 September 2019 at Novo Cemetery, in the grounds of Queen Mary University of London, Mile End campus. And on 16 June, we are running a free drama workshop  that will help originate this new work, and we would like to invite you to join us.

So, what are we discovering? Julia Pascal, Artistic Director of Pascal Theatre Company,  the driving force behind this project, and her team of researchers, have been trawling through seventeenth century documents to read about Jews fleeing conversion in Spain and Portugal, and about Jews being burnt at the stake as heretics to the Christian faith. It is a bloody story, but it is not just a Jewish one. It tells us about Catholic Spain and Portugal and how the power of the Inquisition was a terrible force which meant that Jews were displaced all over the world. The English story comes in to play when Rabbi Menasseh ben Israel approaches Oliver Cromwell in his plea for the re-admittance of the Jews. Officially, England had no Jews after 1290 as England was the first European country to expel them.

“I have been excited to discover that the English Revolution of 1656, when the Republic began, was also the moment when Jews were being thought of as new immigrants.” – Julia

We are discovering the wealth of that Jewish experience that trickled into England from 1492. The languages of Ladino and Portuguese were the cultures of these Jews. Their survival in London is charted, and we have stories and names that reveal this amazing history.

Our workshop on 16 June will be exploring some of the major figures of the story. Who knew that Licoricia was a major funder of royalty in the thirteenth century and one of the richest women in Winchester? There are many characters to explore in the workshop which will be revealing some of the great debates of philosopher Baruch Spinoza and Moses Maimonides.

Using drama and movement techniques, Thomas Kampe will lead participants in playfully revealing the histories and stories we’ve uncovered. In experimenting with staging Sephardi heritage, participants will not only gain historical knowledge but also learn enjoyable ways to create new text and storytelling using this kind of source material. They can also take part in the journey towards using the workshop as inspiration for our site-responsive performance on 22 September 2019.

The workshop is FREE and open to all ages (although not suitable for the very young), backgrounds and abilities. For more information and to book your place go to our Eventbrite page (https://www.eventbrite.com/e/free-drama-workshop-staging-sephardi-heritage-tickets-62602779599).