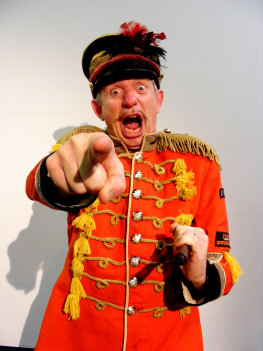 Tony Lidington explains his unusual process to a PhD in Drama. Tony has been working as a showman for over 30 years and is well-known for his exploration of British popular entertainment forms. In the past, he has worked for many well-known venues and companies, combining accessibility and innovation. Each Summer, he scratches a living with “Uncle Tacko’s Flea Circus” (irritatingly fun!) and performs as The Raree Man with his peepshow (an Eighteenth Century form of itinerant storytelling ). Currently he is directing ‘Dick Whittington’ for Exeter’s Northcott Theatre. You can follow Tony’s work on www.prom-prom.com or Facebook “Promenade Promotions”.

I’ve been peddling my old nonsense for 35 years: on streets, beaches, car parks, green field festivals, field events, agricultural shows… in the open, under canvas, bus shelters, on the pier, on the bus, on the deck of boats, in quarries, on the banks of rivers and community orchards. I have run companies, venues, festivals, events, projects and stuck my oar into arts politics and the strategic development of illegitimate arts. I perform, research, teach and broadcast and in the process, I have become a specialist in the vernacular, the unusual, the bizarre and the kind of work that seldom accrues any cultural value… so if you want to know about Pierrot Troupes, Flea Circuses, Peepshows and Pantomime, then I’m your man.

But of course, people seldom ask about such topics, because they aren’t as hip as the current vogue for circus or physical theatre that almost every NPO seems to be encouraged to explore, so they sit, forlorn and almost forgotten as part of our intangible cultural heritage. Everyone knows what a Flea Circus is (or at least they imagine that they do as they shudder at the thought), most have a notion that a Pierrot is part of a kind of twee European clown tradition, and everyone knows about Punch & Judy and Pantomime, but give little thought as to why they have remained so phenomenally successful cultural influences in the British psyche.

For years, friends and colleagues have urged me to put my experiences and thoughts into some sort of structure, whereby these popular entertainment forms might start to achieve recognition and offer me a new strand of earning potential: “You should do a PhD!” they cry. But as a practising artist in the kind of work that earns relatively small amounts rather erratically, “How on earth can I afford to do that?” I’d respond. I have taught modules at Exeter University and been the lead artist on a few AHRC projects, but a PhD… everyone says it takes years and years, that it’s horribly dry and that it costs thousands a year. Given my Herculean efforts over decades to keep the household going and a young family just about clothed, through my work as a freelance artist producing my ‘weird shit’, the task seemed pretty huge.

However, dear reader, there was a way: I had worked with Professor Jane Milling on an AHRC project on pierrots some years previously and periodically we had lunch together to gossip, ruminate about our mutual areas of interest and to hatch plans of various sorts. It was Jane who first suggested that there might be a way to do a doctorate using my current practice to demonstrate the theory behind my thesis and to use my BBC Radio 4 broadcasts and other media-related publicly-available presentations (eg videos and documentaries) as the publications by which my work was validated. This meant that I would be able to present my various recordings as publications and my current work with community pierrot troupes, the flea circus and the peepshow as the demonstration of my thesis; so rather than a large amount of written text (usually around 100,000 words), my thesis simply needed to knit together my existing frame with a theoretical methodology – a task of some 20,000 words only! Here was a potential means to present a PhD that could be achieved in a shorter space of time (cheaper) and that used my current practice (I could keep doing the stuff that paid the bills).

We decided that we would try and find a new way of presenting the materials: for years, PhD students have presented their practical work and recordings as piles of VHS tapes or DVDs. Our plan was to use an interactive Ebook that would have embedded video and sound archives which illustrated points within the text, galleries of still pictures and footnotes that would pop-out when clicked on. No-one had done this before at the University of Exeter, and yet it is a much more accessible way of presenting the ideas for any practising artist. There’s no way I had the technical or digital skill to achieve the graphic design or elegance of format that was required, but the technicians at the department (Jon Primrose & Chris Mearing) were keen to help – thank God! They also wanted to find a way of presenting work in a more accessible way for the future, so that the mechanisms for presenting their materials and the speed of the process meant that it would be increasingly attractive for practitioners to apply to become PhD students.

The process of writing the PhD was not horrible! There were times that it was a struggle and I was pushed to the limits of my capacity to absorb theory, but like many others, I suspect the worst bit was simply trying to work-out what configuration of citation and bibliographical reference was best… should that bloody comma go before or after the closing parenthesis? Aaaaarrgh! So, despite many late nights whilst the family slumbered and snatched hours when I might otherwise have taken the dog onto the beach, I thoroughly enjoyed attempting to provide more objective rigour to my former ramblings and found the overall process of research, writing and appraisal, to be both rewarding and empowering.

I am told that I am quite a driven, obsessive individual, but with the prods, pokes and cajoling of Professor Milling and the endless patience of the technicians in the department, it also only took me fourteen months to submit the final Ebook version: the next problems were to get the Ebook into a format that the University could process and getting the viva organised. Astoundingly, this took a further five months! I submitted the Ebook on a series of memory sticks, together with some explanatory notes about what programmes were necessary to ‘read’ the thesis in that format… this proved especially difficult because not all the examiners owned Macs (the best operating system with which to read Ebooks). I ended-up fielding calls from the university, my supervisors and even one of the external tutors as they tried to work-out how best to read the material. So what was intended as an accessible format, turned out to be difficult to distribute.

I passed the viva, but was required to make major corrections: these I delivered in three weeks, but a further problem ensued because I was forced to represent the corrected thesis in an ordinary Word document alongside the Ebook (but minus the video, audio & interactive elements), so that my amended work could be judged more easily. The doctorate was duly awarded, but although the Ebook resides in the University’s thesis archives, the Ebook itself is not accessible to the public because of concerns over the ownership of the copyright on my various BBC broadcasts, which were accepted as the published part of my thesis. Although I had written the material for broadcast and presented the material for broadcast, the BBC retain copyright on the broadcast programmes themselves – it’s a grey area, but the University were anxious and so have placed an embargo on the availability of the Ebook. (However, if you want me to send you a copy for private use, just let me know!)

The whole process took me twenty months from start to finish, although the thesis is really the culmination of three decades of practice. I am now a Doctor of Philosophy – which fits my performing soubriquet of Uncle rather well, for now I am DrUncle. I am hoping to find a way of continuing my academic research alongside my performance practice by applying for early career research fellowships and the occasional part-time post as a researcher/lecturer. The process was hectic, but rewarding. As much as anything, I learned how academia works – how it has its own language and protocols. I am very proud of my qualification and I am very privileged to have had such a supportive team behind me – both personally and academically. For now, I continue showing my Flea Circus, directing Pantomime and next week I give a talk about Peepshows to Cambridge University… plus ca change!

Have you taken an unusual route to a PhD or MA? If so, we’d love to hear from you, email us at nrn@str.org.uk