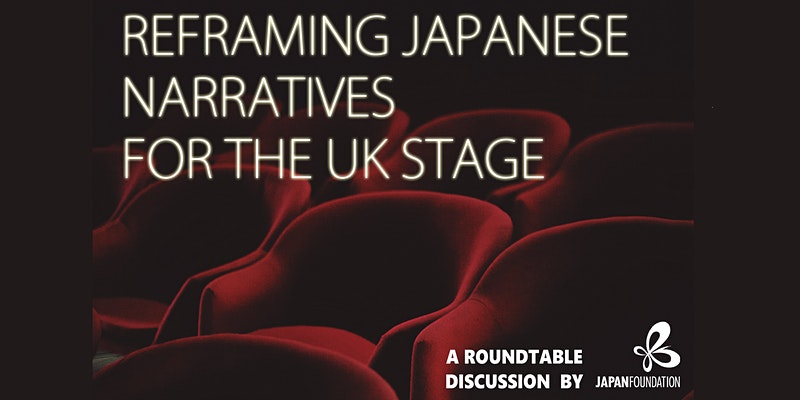 The Japan Foundation is hosting an online roundtable discussion between UK theatre professionals who have looked towards Japan for source materials in their respective productions. To book for this fascinating event, click on the link:
https://www.eventbrite.co.uk/e/reframing-japanese-narratives-for-the-uk-stage-tickets-157028944801

This online event is free to attend but places are limited and registration is essential. To reserve your space, please book your ticket here. Please note that this session will be hosted on Zoom. Once your registration is accepted, you will be sent an access code on the day of the event.

About this event
In recent years there has been a noticeable trend in new UK productions made for the stage to be sourcing their ground material not only from Japanese plays but also through adapting other forms of Japanese media, such as anime, literature, or film. Be it a direct adaptation or simply taking inspiration, the communication of the culture which the original is steeped in is not entirely removed from the creation process. The culmination of such adaptations results in distinct visions of Japanese culture reframed to suit the message of their creators and lend relatability to their native audiences.

In celebration of After Life, adapted for the stage from Hirokazu Kore-eda’s feature film and to be presented at the National Theatre between 2 June and 24 July 2021, the Japan Foundation invited a group of UK theatre professionals – who have looked towards Japan for source materials in their respective productions – to join an informal roundtable talk aimed at exploring the significance of looking at other languages and art forms in conceptualising new works, and any challenges that may be faced in doing so.

About the panellists
(Moderator) Professor Ken Rea is a theatre director, acting teacher, and author of the bestseller, The Outstanding Actor, Seven Keys to Success. After working as a leading actor and director in New Zealand, where he founded the Living Theatre Troupe, he studied theatre in Bali, Java, India, China and Japan, as well as studying with leading European teachers. Today, at the renowned Guildhall School of Music & Drama, where he is Professor of Theatre, Ken has trained some of Britain’s leading actors, bringing to them his unique process, influenced by his research in Asian theatre. Through his corporate training Ken has also made a striking difference to thousands of business leaders. And as a journalist, he has been a regular feature writer for The Times and was for 15 years a theatre critic for The Guardian. As a public speaker, Ken gives many large-scale presentations in the worlds of business and the arts.

Franko Figueiredo is the co-founder and artistic director of StoneCrabs Theatre Company. Franko and StoneCrabs Theatre Company have been running yearly drama workshops in Japan since 2006. He has directed all of Mishima’s Modern Noh plays in English for StoneCrabs to great critical acclaim, including Sotoba Komachi (Metro and Time Out Critics Choice); Busu (Mishima’s take on the Kyogen play of the same name), and The Damask Drum (International tour, Pick of the EdFringe 2017). Franko also directed Asphalt Kiss, a co-production between One Two Works and StoneCrabs at Owl Spot Theatre, Tokyo in 2018.

Currently they are collaborating with Busu Theatre on a new production inspired by tales of loneliness and Japanese folklore.

Jeremy Herrin trained as a theatre director at both the National Theatre and the Royal Court, where he became Deputy Artistic Director in 2008. He became Artistic Director of Headlong Theatre in September 2013. In 2009, Jeremy directed Polly Stenham’s play, Tusk Tusk for which he was nominated for an Evening Standard Best Director Award. In 2012 he was named as one of the Stage top 100. In 2014 Jeremy directed the critically acclaimed adaptations of Hilary Mantel’s novels Wolf Hall and Bring up the Bodies for the RSC and was nominated for an Olivier Award for Best Director. The productions transferred to the West End at the end of 2014 and opened on Broadway in April 2015. Most recently he directed Noises Off at The Garrick Theatre and The Visit at The National Theatre. For TV Jeremy directed Talking Heads and Unprecedented for the BBC.

Yojiro Ichikawa is a director who has been working in the UK, US, EU and Japan, in various kinds of theatre including musical, drama and physical theatre. He founded and has been the Artistic Director of a UK theatre company Théatre Lapis, which aim is to question traditional boundaries including those that exist between genres or cultures, and to seek other frontiers. His directing credits include Letter from the Sea at Polish Theatre Bydgoszcz and the New National Theatre Tokyo, Tell Me On A Sunday at the New National Theatre Tokyo which won a Yomiuri drama award, The Red Candle based on Mimei Ogawa’s Novel, at the Brunel Museum and was also appreciated by Prince Edward, Earl of Wessex, Pearl and Dagger at The Other Palace, a new musical created through the collaboration between the British and Japanese creatives, and KUWENTO an online production based on Japanese folktales.

Alexandra Rutter is a director and producer of Anglo-Japanese collaborative theatre, and an ambassador for inter-cultural productions based on Japanese source material. She founded and has been director of UK Theatre company, Whole Hog Theatre since 2012 and is currently a Resident Director and Producer at Nelke Planning: a leading Japanese producer of “2.5 Dimensional Musicals” (theatre based on Japanese animation, comics and video games). Her most notable work includes: Creative Director on Magia Record (Madoka Magica Franchise) starring idol group Keyakizaka46, and Director of the world’s first stage production of a Hayao Miyazaki film Princess Mononoke (with the kind permission of Studio Ghibli). Most recent credits include the postponed 2020 production of the world’s first stage adaptation of The Garden of Words, based on the Anime by Makoto Shinkai and CoMix Wave films.

Special thanks to the National Theatre and IGAWA Togo.