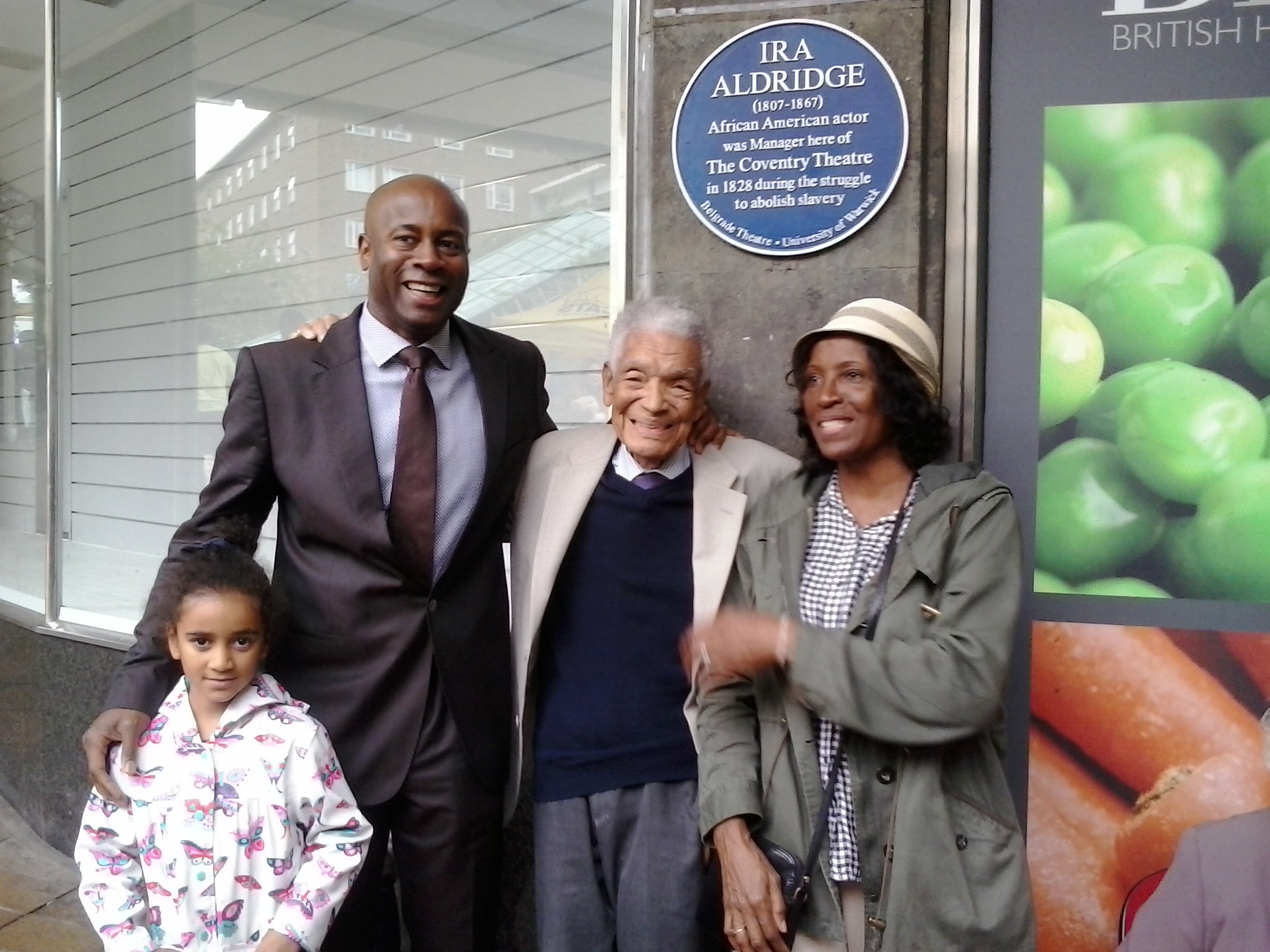 image: Nicholas Bailey and family with Earl Cameron underneath the plaque unveiled to Ira Aldridge in 2017 in Coventry. Photo taken by Jami Rogers

Jami Rogers won a Research Award in 2019 for her researches into the achievements and experiences of Black and Asian Shakespearean actors. She writes:

With the generous award I was granted by the STR towards research expenses, I was able to conduct a total of eighteen additional interviews for my monograph, British Black and Asian Shakespeareans, 1966-2018: Integrating Shakespeare. The professional experience of the actors interviewed spanned the entire scope of my book, from Sam Dastor and Rudolph Walker to Paapa Essiedu and Alfred Enoch.

The first-hand accounts of both their work and experiences within the industry has provided invaluable context for the primary premise of my book, the persistent inequalities within contemporary Shakespearean production for actors of colour. I have also been able to write with much more authority about some important – and up until now – neglected productions. For example, talking to Rudolph Walker about his 1966 Othello in Malvern gave me important context about his early career and the ways in which his early encounters with Othello provided him with the framework for tackling it again in 1984 at the Young Vic, when he became only the fourth black man to play the role in London. At the other end of the time frame, the conversation with Paapa Essiedu not only gave me his input about the character of Hamlet, but also the experiences of touring the show two years later. Paul Bazely provided me with important context about his early career in the 1990s, including his involvement with Shakespeare at the National Theatre in the 1990s.

Given the gaps in scholarship regarding the characters played by actors of colour, these interviews were also invaluable in that regard: Paapa Essiedu talked at length about Hamlet; Alfred Enoch about Edgar; Amber James about Cressida; Theo Ogundipe about Ajax and Banquo; Ashley Zhanghaza about Laertes and his Ian Charleson Award-winning Ross; Martina Laird about the Countess in All’s Well and Brutus in Julius Caesar; and Patrick Robinson about being the first black man to play Romeo at the RSC.

In addition to the interviews, my frugality with advanced tickets has also enabled me to make four visits to various archives in London and to pay to watch the archive videos at the RSC.

Without the assistance of the Society for Theatre Research, much of this research may have been curtailed. The book will be much more nuanced and in depth with the grant.