Inside the Rehearsal Room 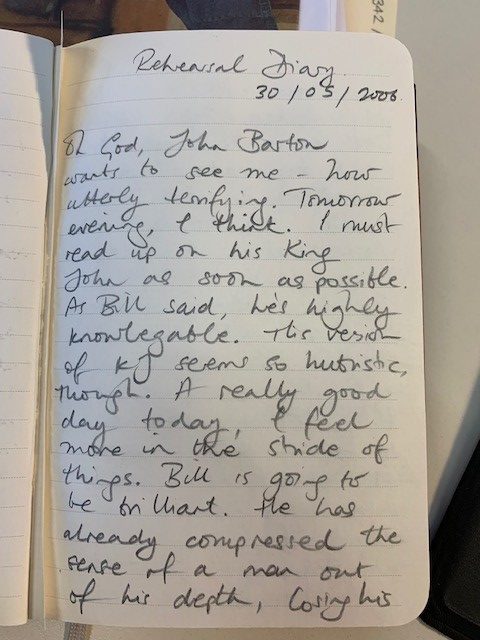 Robert Marsden of Staffordshire University received an award last year for travel in connection with his research into the nature of the rehearsal process. He writes:

I was delighted to receive a Society for Theatre Research award towards my monograph that I am working on entitled Inside the Rehearsal Room (commissioned by Bloomsbury) which explores the relationship between text, actor and director in rehearsals and wider theatre-making processes.

The award enabled me to spend three days in the Victoria and Albert Museum archive from the 28th to 30th August 2019, exploring the material of the Peter Brook archive, the Josie Rourke Collection, the Young Vic Production Files, the Royal Court Archive, Cheek by Jowl’s Production Files and the Gillian Hannah Archive amongst others.

In the archive, I have been able to research into how decisions were arrived at which may suggest what may have happened in the rehearsal room directly, or how rehearsal room decisions affected wider choices in the theatre-making process and how choices outside of the rehearsal room by actors and directors may have affected decisions. The archival material consisted of personal notebooks, scraps of paper with scribbled notes on, directorial research undertaken from secondary source materials, annotated scripts of directors and actors, correspondence between actors, directors and designers, formal rehearsal and performance reports and wider unpublished materials. I was particularly interested in finding details from the sub-rehearsal, which is what Terence Crawford terms as any

moment that occurs outside the specific organised schedule of the rehearsal, outside the direct interrogatory gaze of the director, or beyond or beneath the understood agenda of a rehearsal moment. (Crawford, 2015, p.187)

Taking the Josie Rourke Archive as a key example, here are some interesting initial findings:

All of the research will feed into the writing of the book due to be published in 2021, allowing for real-world examples from the archival materials.

Is there anything that you are currently working on that might be eligible for one of our Research Awards? We welcome applications from all kinds of theatre researchers – academics, practitioners, independent scholars.  Closing date for 2020 applications is March 27th.
Full details and application form here.