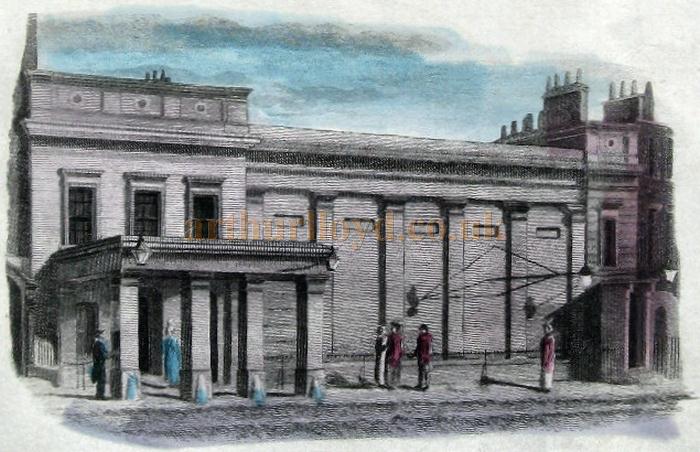 The Regency Theatre in 1817, which went under several name changes before becoming Mayhew’s Fitzroy Theatre (briefly) in 1834, and ultimately the Scala.***

Readers of our Green Room blogs will remember A query swiftly answered  which turned on the identification of a quotation from Henry Mayhew’s Wandering Minstrel. Chris Anderson has written a new biography of the author and writes here about Mayhew’s involvement with the theatre:

Henry Mayhew, the author of London Labour and the London Poor, and founder of Punch magazine, was involved with the theatre throughout his long and varied career. He managed the Fitzroy Theatre in 1834 with his long-time collaborator, Gilbert à Beckett. On 16 February 1834 the Fitzroy premiered Mayhew’s most successful play, The Wandering Minstrel, a Farce in One Act (under his then pen name of Ralph Rigmarole)*  Built around a plot of misunderstandings, the central character was a down-at-heel chancer Jem Bags, who rounded off the show with a cockney parody of an old folk song ‘Villikins and his Dinah’. An instant hit, The Wandering Minstrel remained a favourite of Victorian music hall throughout the century.

À Beckett contributed a series of burlesques, including the opening musical The Revolt of the Workhouse, which combined song and dance with an attack on the new Poor Laws. The Fitzroy lost money, and by the late summer à Beckett was suing for bankruptcy. Desperate for cash, Mayhew sold the copyright of The Wandering Minstrel for £150. He remained bitter about this, complaining over 30 years later that it ‘has since yielded the owner of the copyright £200 per annum on average’.**

In the 1840’s and 1850’s Mayhew (writing in collaboration with his wife Jane and younger brother Augustus under the name of ‘The Brothers Mayhew’) brought out several comic novels, all of which were written with the theatre in mind. He had a longstanding collaboration with the Haymarket Theatre, and the biography contains his correspondence with the management there, arranging the serialisation of his novels with a performance in mind. As late as the 1870’s he was back at the Haymarket with a play called Mont Blanc, by then writing in collaboration with his son, Athol.

The Fitzroy Theatre survived under new management. It underwent several guises in the 19th Century and is more commonly known as The Scala Theatre.***

Chris’s book London Vagabond can be found on Amazon only (kindle or hard copy), and more details on the book, together with previous articles by Chris on Henry Mayhew, can be found on his website here