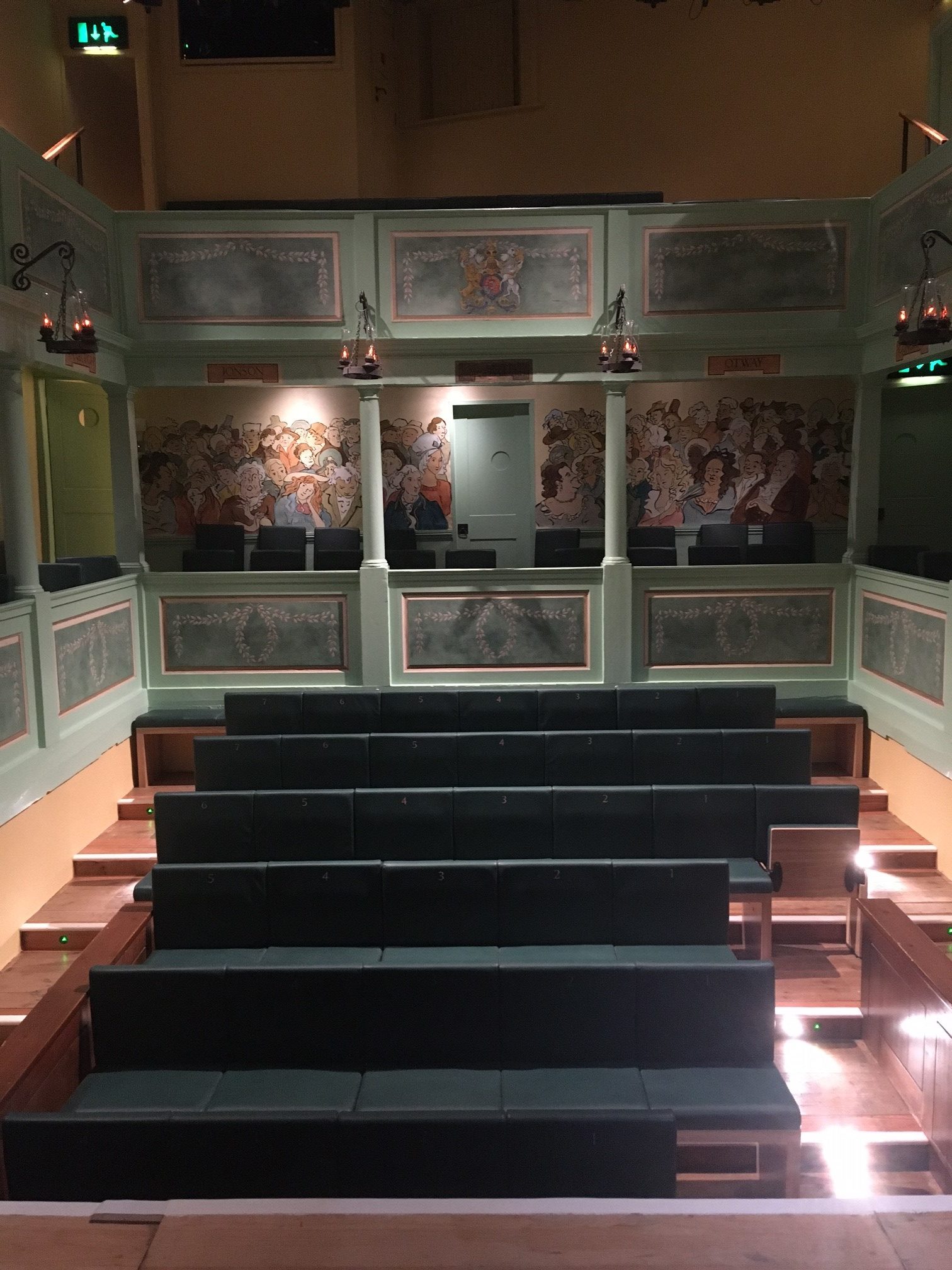 Society Member Dave Palmer is a volunteer at the Theatre Royal in Richmond, and writes for us here about their tremendously successful refurbishment throughout all the difficulties of the past year, and their triumphant re-opening:

In July 2020, I gave an update about The Georgian Theatre Royal’s ambitious plans for post-Covid recovery. A generous donation of £375,000 from The Hamish Ogston Foundation had enabled a redevelopment of the auditorium to begin. Plans had been accepted for the updates to the Grade 1 listed building to go ahead, and tenders were being produced.

A lot has happened since then.

Local Richmond-based company Acomb Construction Ltd. were appointed to remove the 1960’s seating and prepare the auditorium for the new seating. In parallel to the seating project, a wider auditorium development was taking place to replace the house lighting and the antiquated and increasingly unreliable heating and ventilation system, addressing the other main customer complaints of overheating (patrons had passed out!) and freezing cold. In addition to stripping out, this involved lifting floorboards, which resulted in the discovery of newspaper from the 1960’s used as packing and crisp packets of indeterminate age.

The seating production was assigned to Race Furniture of Bourton-on-the Water, who have extensive experience of both Theatre and Heritage projects. They built the new seating off site and Acomb prepared the new tier structures to accommodate the new seats to provide better legroom. At an early point in the specification of the seating aspect, it was decided a simpler solution to the original plan was more appropriate (cost was not a constraint, the new solution was better). This did result in cost savings, however, and after obtaining approval from The Hamish Ogston Foundation, the savings were allocated to other Theatre improvements. This resulted in a project to replace all the Stage lighting.

The only setback was at an early stage – a complete structural survey revealed some cracking in a very large original oak beam which holds up the front of house end of the auditorium. While this was not regarded as serious (the cracks could be have been there for over 200 years!) it was decided to install a large oak support to be certain, which resulted in the only planning alteration to be requested and granted.

The overall project required minor repairs to the internal walls and structure, and a complete redecoration of the internal walls. The walls at box level were painted canvas from the last renovation in 2003 and a brilliant suggestion from Heritage Consultant Richard Maddison, who was the Project Director, led to a tender to produce a painted Georgian audience on the new canvas. The artwork was designed by Lotte Brockbank and applied in a freezing cold theatre in January.  Poor Lotte and her assistant had to work with hot water bottles strapped to their bodies! The resulting mural is spectacularly good.

Most of the permanent Theatre staff were on furlough and the volunteers obviously stood down, but everyone was kept up to date by CEO, Clare Allen, in a weekly Zoom meeting. As with most building projects, little seemed to be happening until, suddenly, the new tier structure was complete, the repairs and redecorating done and the seating appeared as if by magic. New house lights and stage lights were installed and commissioned and the control desk updated. As well as improved control, the new LED lights will also result in significant cost savings in efficiency as well as reducing the heat signature, resulting in further savings in heating costs.

So, just in time for easing of lock-down, our original 1788 auditorium is equipped with comfortable seating, modern lighting systems and modern heating and ventilation. The system provides a supply of fresh air, taken in at the rear of the theatre and delivered via the Georgian-style chandelier ducts in the auditorium ceiling at the correct temperature then extracted via hidden vents.

We opened to the public for tours on 20th May, having had open days for volunteers. A consistent comment is that the Theatre “feels” just like as it was before.  I think it is a triumph for the project that it just seems totally natural as a Heritage Theatre while being as up to date as any in the country and ready for its audience in the new post-Covid era.

In addition to The Hamish Ogston Foundation, the project has benefited from grants from  The Pilgrim Trust, The Foyle Foundation, The Normanby Trust and The Theatres Trust in association with The Wolfson Foundation. The Theatre has survived lock-down thanks to Government support via the job retention (furlough) scheme, the Arts Council England’s Culture Recovery Fund, and the continuous support of The Sylvia Crathorne Memorial Trust, the Liz and Terry Bramall Foundation, Friends of the Georgian Theatre Royal, and the generous support of regular giving through ‘A Living Theatre’ Campaign and the Theatre’s supporters, many of whom donated their tickets from cancelled shows.