#FinboroughForFree: Masks and Faces Or, Before and Behind the Curtain by Charles Read and Tom Taylor 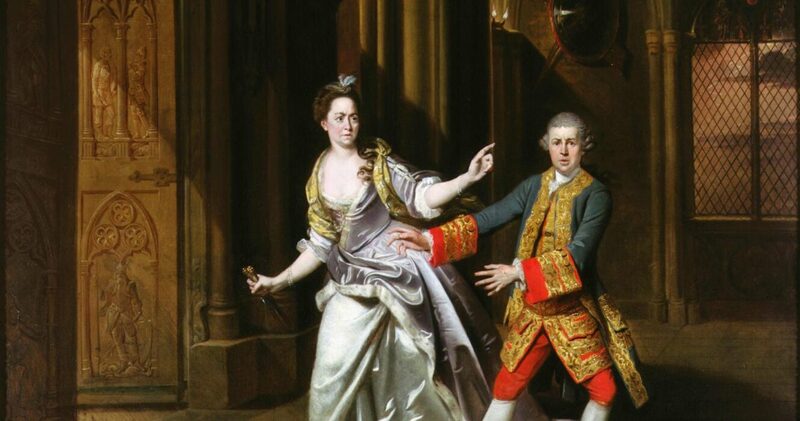 “We are actors. The most unfortunate of all artists. Nobody regards our feelings…”

The online premiere of a unique rediscovery

UPDATE – due to technical difficulties with the recording, Masks and Faces will now be available to watch on the Finborough Theatre YouTube channel from Wednesday, 28 July at 6.00pm to Wednesday, 25 August 2021 at midnight.

All information to be found on the Finborough Theatre site: click here.

Available with subtitles on Scenesaver here.

Country gentleman Ernest Vane comes to London and is seduced into the celebrity lifestyle of a group of players – soon discarding his new wife for the more obvious charms of the great stage actress Peg Woffington.

In the tradition of The School for Scandal and The Rivals, Masks and Faces is both a 18th century period caper and a tribute to the backstage world of the theatre, complete with the hapless failed playwright, Triplet, and his hungry family, to real-life writer Colley Cibber, and the ghastly critics Soaper and Snarl……

Set in the 18th century, written in the 19th century, filmed in the 20th century (with an all-star cast), and now presented for the first time online, Masks and Faces is a celebration of making theatre.

First performed in 1852, the history of Masks and Faces is rooted in Kensington and Chelsea and the local area around the Finborough Theatre. It provided Ellen Terry – a former resident of Finborough Road, and a long term resident of Earl’s Court – with one of her first and most acclaimed leading roles. The production is supported by the Friends of Brompton Cemetery, next to the Finborough Theatre, where the co-author Tom Taylor, and actors Ben Webster and Sir Squire and Lady Bancroft – all known for their roles in Masks and Faces – lie buried.