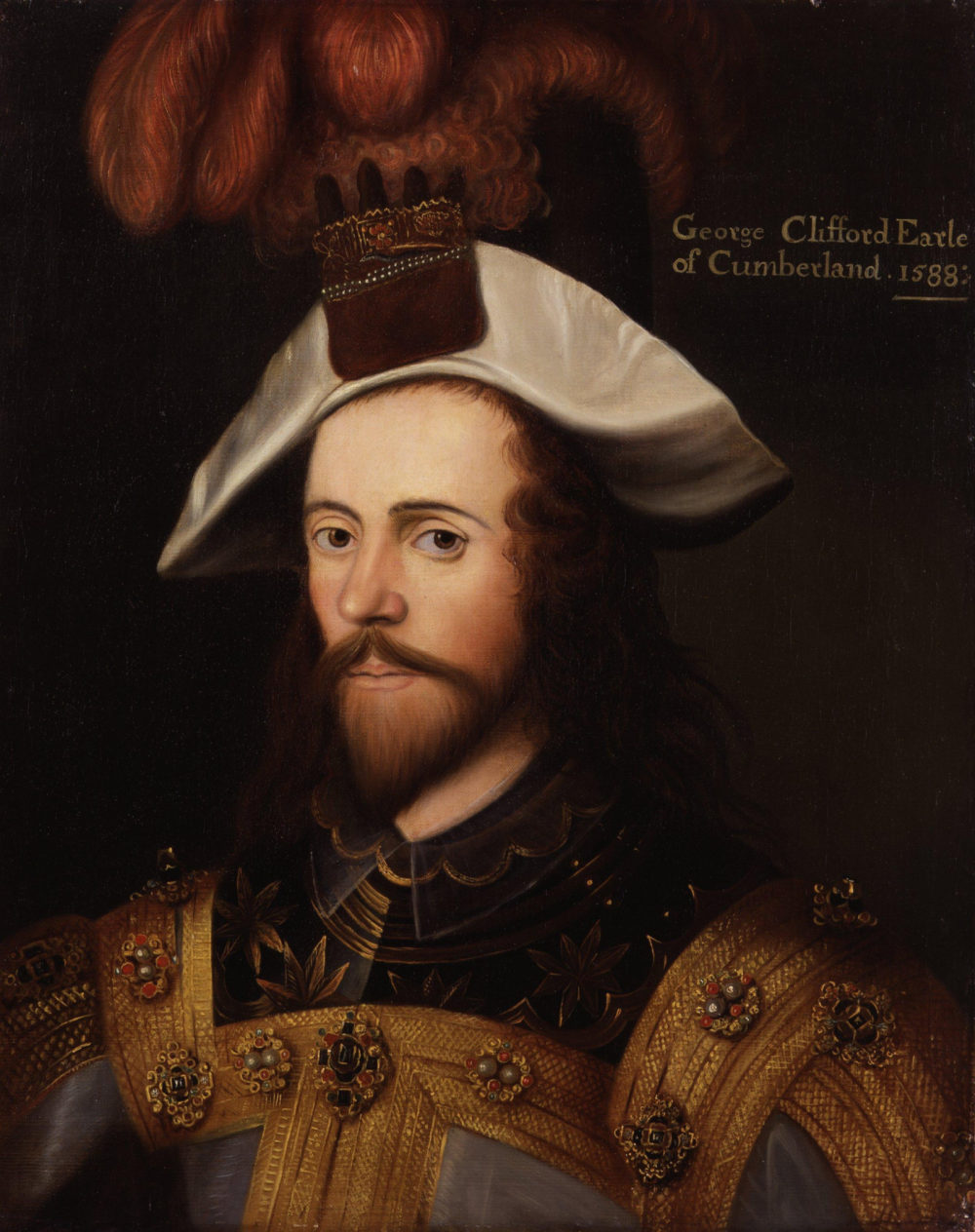 In 2021 Felicity Brown received the Anthony Denning award of the STR for her researches into Elizabethan tournaments. Here she writes about Arthurian themes in the tiltyard entertainments of the early 1590s featuring the Earl of Cumberland.

My research on the Accession Day Tournament performances of the “Privateering Earl”, George Clifford, third Earl of Cumberland, was made possible thanks to the Anthony Denning Award.

Cumberland performed as the Pendragon Knight in 1591 and 1593 as part of the annual tournament that featured a series of elaborate entertainments held on 17 November, to celebrate the anniversary of Elizabeth I’s accession. The central feature of the celebrations, open to the public for a small charge, was a tournament in which the Queen’s courtiers competed with one another in the tiltyard at the Palace of Whitehall. Not only did combatants participate in jousting, but they wore elaborate armour and costumes, presented gifts, adopted allegorical personas and recited scripted prose and poetry (or were accompanied onto the yard by actors or pages who did so). Why, then, have these shows been neglected in examinations of early modern performance culture? My work on this seeks to bring pageantry scholarship into dialogue with martial, maritime and sporting histories to investigate the relationship between romance and reality in the performance of power.

To dig deeper into these performance histories, I visited the Kendal Archive Centre in Cumbria which holds the records of Lady Anne Clifford, the Earl’s daughter. Amongst them, the manuscript (WD/Hoth Acc. A9886), a text which consistently casts Cumberland as great explorer and chivalric warrior, holds two separates. On these pages, kept between accounts of his ‘eighth’ voyage in 1594 and ‘eleventh and later Voyages to the West Indies 1597’, the speeches from his tournament performances (given not by the Pendragon Knight himself but by the Merlin-page who accompanied him) have been preserved, along with additional annotations. Excitingly, this allowed me to explore: the significance of Pendragon Castle, as both motif and portable set; the adaptation of Merlin’s prophecies to speak to Elizabethan foreign policy; and the presentation of mariners as a chivalric community. What is particularly intriguing is that Cumberland included seamen, imbuing the profession with a chivalric nobility by drawing parallels between the marginal identities of the mariner and the errant knight, as well as their forms of fellowship. The evidence even suggests that Cumberland’s second tournament show featured some of the actual sailors who had accompanied him on previous maritime ventures, rather than actors in costume. This may have been intended to support his (thinly) allegorical petition for remuneration from the Queen for the financial losses he endured as a result of his maritime exploits against the Spanish.

My award also allowed me to transcribe part of a manuscript collection of Lord Henry Howard’s, later Earl of Northampton (BL Cotton MS Titus C vi) at the British Library. In this (almost illegible) collection, I found the draft of an unperformed tournament show that radically reframes the central themes of Cumberland’s performances within the political context of the Essex circle around the time of Robert Devereaux’s voyages to Cádiz in 1596 and the Azores in 1597. This text also has wider implications for early modern discourses of exploration and colonisation.

The Anthony Denning Award has thus enabled me to investigate the ways in which these shows reimagine the relevance of the Arthurian legend for Elizabethan England by paralleling the dangers and wonders of privateering with those of romance. I am currently charting the impact of these innovations on depictions of the voyages of Sir Francis Drake, Sir Martin Frobisher, and others. I am immensely grateful for the support of the STR on this work which I plan to publish later this year.