Kate Bramley and her company BadApple received a Practitioner Grant in 2021 towards research and development of her play Elephant Rock. Here she writes about the play, its background and development.

As I draw to a close the development phase of my latest play ‘Elephant Rock’, I am most grateful to The Society for Theatre Research for their support. The practitioners grant awarded came at a much-needed time- after the Covid pandemic- and was used for office overheads like Zoom and Dropbox which have become even more vital for collaborating with designers, musicians and actors in the final refining of a performance script.

The play itself is an original comedy set against the backdrop of the old Palace dance hall which is slowly crumbling into the sea. The attractions of the heyday of British seaside towns like the Mechanical Elephant and the Elephant Rock have long since been lost or faded into the landscape. I drew inspiration from actual historical landmarks from the East coast of England and mixed them into the fictional town of Elephant Rock. 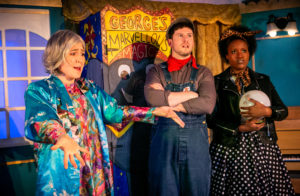 But my research took me further afield as well, as the family owners of the building have a colourful “travelling show” past that weaves together descendants from Ireland and Sri Lanka. I was interested in exploring what the modern British melting pot of ethnicity is now, with many of my child’s friends having conversations that start with, “I’m a quarter this and half that… so I can play for both those national football teams and for England!” And for the family in Elephant Rock it’s not so much where they’re from but why they have a determination to stay and make a life in the place they call home – much like the elephants who roam free across the alimankada, the pathways that criss-cross the island of Sri Lanka – and seem to pass down a map of their homecoming routes through generations of animals.

It has been an interesting journey so far and we have performed to live audiences right across the country in an array of community halls and theatres, and an unexpected stop at York Theatre Royal in May at the request of their Theatre Takeover Festival.  So the future is looking bright for this project, thanks in no small part to the strong support from the Society which gave a much needed confidence boost at a difficult time.

The tour continues for a few more nights in Yorkshire and then a fortnight further afield to close the tour in mid-June.  All details and booking via the website!