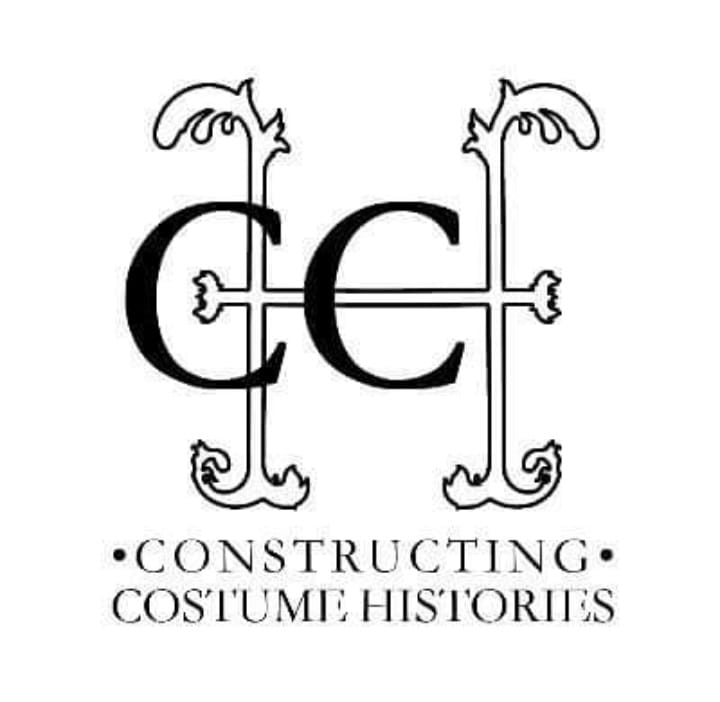 Veronica Isaac and Jade Halbert received a grant in 2021 to further their project on the history of costume – the grant went towards holding a study day in Huddersfield, and Veronica writes for us here about it.

Constructing Costume Histories is a research project that establishes the central role of costume making and costume makers in the long and vibrant history of British Performance. It brings together performance institutions, professional networks, community groups and individuals with distinct costume making traditions to document, preserve and promote British costume heritage and practice.

The funding we received from the Society of Theatre Research enabled us to host an in-person study day at the University of Huddersfield on Friday 24th September 2021. We were able to invite 7 speakers, each one a specialist in the field of costume making. They were: Amy Hare, Lauren Martin, Liz Garland, Toni Bate, Stephanie Blythman, Rebecca Morrison and our keynote speaker, Jenny Tiramani.

Amy Hare presented ‘Making History: Costume Making as Scholarship in Post-War Britain’. This interactive presentation focused on the work of Norah Waugh and her colleagues at the Central School of Art. Waugh was devoted to dress history research, passing on knowledge to students through innovative practical education and through publication in a variety of exciting ways.

To give participants at the study day the chance to experience Waugh’s teaching methods, Amy facilitated an interactive drawing session in which students of Costume at the University enjoyed the opportunity to get up close with some original garments and produced beautiful illustrations.

Following Amy, Lauren Martin presented ‘Beyond the Needle and Thread: The Intangible Elements of Costume Making.’ In this presentation she discussed her work as a milliner, costume maker and researcher. She was able to bring an original 1830s piece from her own personal collection, along with 3 reproduction bonnets, created using self-drafted patterns. Using a variety of materials she described the time taken to produce each bonnet: ranging from 13 hours to 40 hours!

After her presentation, students had the chance to handle the bonnets while Lauren pointed out the finer details of their construction.

Our third presentation of the day was a conversation between costume makers, teachers and researchers Liz Garland and Toni Bate.

Surrounded by students’ work and costumes from Sheffield’s Crucible Theatre, they meditated on the theme ‘To Zip or not To Zip?’. They considered what makes a good costume and where clothing becomes costume, and the value attached to costumes as they move between different costume contexts. Their lively exchange reinforced the importance of being versatile and adaptable in costume making. Students enjoyed critiquing the costumes on display and learning about the circumstances of their construction and how this shaped the final result.

She began her presentation by demystifying some of the academic language used in costume research, and how her experience as a maker had informed and enriched her methodology. She discussed how surviving costumes, patterns and design drawings are useful sources when researching. Using maps she traced the costume networks which operated in Paris, bringing to life the theatrical world of French capital in the seventeenth century.

Stephanie also invited students to handle samples of fabrics which represented the kind of materials which could have been used in costuming during this period. This revealed the important insights into costume practices which result from a consideration of the social, cultural and practical factors which shape historical costume making.

Our penultimate speaker of the day was Rebecca Morrison who presented ‘(Re)making as Method: Different Approaches to Reconstructing Historic Garments.’ Rebecca explained her how previous career as a costume maker had enabled her to understand and document the construction of the eighteenth century mantua and the lives of the women who made them.

Students were encouraged to engage with two examples of reconstructed mantuas, the first, a full size mantua, made from calico, the other, a half scale mantua c.1720, made from silk. Both had been created to answer research questions about method, skill and technique. They provided students with insights into how mantua makers worked in the eighteenth century and an awareness of how the skills they were developing in costume making could be translated to historical research.

Our Keynote Speaker was Jenny Tiramani, from the School of Historical Dress who delighted us all with ‘When is a Costume not a Costume?’. Professor Tiramani opened by sharing her mantra: Content, Cut, Construction, Context. This is a methodology she has refined throughout a long career, during which she has moved between designing for the stage, creating rigorously researched historic dress, and publishing widely on these themes – including the hugely influential Patterns of Fashion series.

Jenny brought examples of the costumes and garments created by the team at the School of Historical Dress – all of whom are both expert historians and experienced costume makers. These included a pair of stays worn by Mark Rylance as Olivia in the 2012 production of Twelfth Night (originally presented at the Globe as part of their Original Practice Productions). She also brought a half-scale doublet and hose and half-scale mantua – both featured in Patterns of Fashion. Students were encouraged to handle and examine these garments, one even modelled them for the audience!

Without the support of the STR this event would not have been possible. The themes emerging from the discussions have allowed to develop Constructing Costume Histories further and have informed and enriched our application for an AHRC Early Career Research Grant which we intend to submit before the end of this academic year.

Thanks are also due to our Digital Project Officer, Lucy McConnell, for her invaluable assistance during the day and for taking the photographs featured in this report.